The Art of Missing Link (Hardcover) 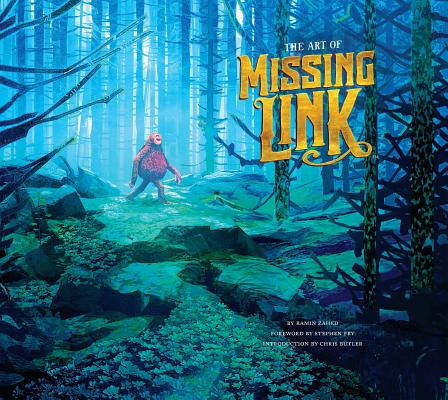 By Ramin Zahed, Stephen Fry (Foreword by), Chris Butler (Introduction by)
$45.00
Possibly out of print. Email or call to check availability and price.

The Art of Missing Link is a lushly illustrated volume that goes behind the scenes of LAIKA’s new stop-motion adventure.

The charismatic Sir Lionel Frost (voiced by Hugh Jackman) considers himself to be the world’s foremost investigator of myths and monsters.  The trouble is none of his small-minded high-society peers seems to recognize this.  Sir Lionel’s last chance for acceptance by the adventuring elite rests on traveling to America’s Pacific Northwest to prove the existence of a legendary creature. A living remnant of Man’s primitive ancestry. The Missing Link.

Zach Galifianakis voices Mr. Link: the surprisingly smart, funny and soulful beast upon whom Sir Lionel’s dreams depend.  As species go, he’s as endangered as they get; he’s the last of his kind, and he’s lonely. Proposing a daring quest to seek out his rumored distant relatives, he enlists Sir Lionel’s help in an odyssey around the world to find the fabled valley of Shangri-La.

Together with Adelina Fortnight (voiced by Zoe Saldana), an independent and resourceful adventurer who possesses the only known map to the group’s secret destination, the unlikely trio embarks on a riotous rollercoaster of a ride. Along the way, our fearless explorers encounter more than their fair share of peril, stalked at every turn by dastardly villains seeking to thwart their mission. Through it all, Mr. Link’s disarming charm and good-humored conviction provide the emotional and comedic foundation of this fun-filled family film.

From LAIKA, the animation studio behind the Academy Award–nominated Kubo and the Two Strings, Missing Link is a stunning stop-motion epic and raucous comedy. Featuring concept art from the film’s creation—including sketches, storyboards, character designs, and much more—and illuminated by in-depth interviews with the film’s creative team, The Art of Missing Link is a must-have companion to the film.

Ramin Zahed is the editor in chief of Animation Magazine. A journalist who has covered the film and television industries for over twenty years, his writing has appeared in Variety, the Hollywood Reporter, the Los Angeles Times, and Movieline. He lives in Los Angeles.

STEPHEN FRY is an English actor, screenwriter, author, playwright, journalist, poet, comedian, television presenter, film director, and all-around national treasure. Fry has written and presented several documentary series, contributed columns and articles for newspapers and magazines, appears frequently on the radio, reads for voice-overs, and has written four novels and three volumes of autobiography: Moab Is My Washpot, The Fry Chronicles, and his latest, More Fool Me.

CHRIS BUTLER made his writing and directing debut with ParaNorman, and he has been a leading creative force at LAIKA for more than a decade. Missing Link marks his return as both writer and director. His work has been nominated for an Academy Award, a BAFTA, several Annies, and even the first GLAAD award nomination for an animated feature.

"My advice would be to order the book, then see the film in theaters opening day, then read the 176-page tome to take a deep dive into everything you missed in Missing Link before seeing the movie again ASAP. That’s the ideal way to embark on this particular adventure."
— Collider

"One of the most striking layouts in the whole book is a series of side-by-side before-and-after shots revealing the on-set reality and the finished feature film frame, but there are gems on each and every page."
— Collider

"Where The Art Of Kubo was mostly a gallery of concept art, this latest Laika tie-in strikes a better balance, with more images of on-set puppetry alongside all the drawing-board loveliness. Stephen Fry supplies an (of course) erudite, funny foreword, though top quote is director Chris Butler’s description of Link as “a hairy avocado on legs”. Illustrator Warwick Johnson Cadwell’s sketches, meanwhile, are a precious find all of their own."
— Total Film

“The most extraordinary explorer’s log one could wish for.”
— Skwigly Animation Magazine