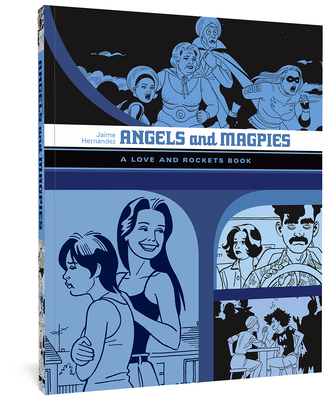 This is book number 13 in the The Complete Love and Rockets Library series.

The sublime, the superpowered, and the senior citizen converge in Angels and Magpies, which collects the Gods and Science: Return of the Ti-Girls and The Love Bunglers graphic novels from the Love and Rockets Vol. III: New Stories series, as well as Hernandez's 2006 serial for The New York Times. In the latter, Maggie pays a visit to Queen Rena, who is living out her twilight days on an island after a lifetime as a wrestler and an adventuress. In the Ti-Girls segment, superheroics get a screwball spin when Angel of Tarzana and Maggie square off against Dark Penny Century. In the "Love Bunglers," held as perhaps Hernandez's greatest masterpiece in his decades-spanning career, and one of the great graphic novels of all time (it was hailed by Slate and Publishers Weekly as one of the best stories of the year), the past and present converge as Maggie and Ray's reunion is threatened by long-buried family secrets. This is the thirteenth volume in The Complete Love and Rockets Library and chronologically the sixth part of the Locas storyline.