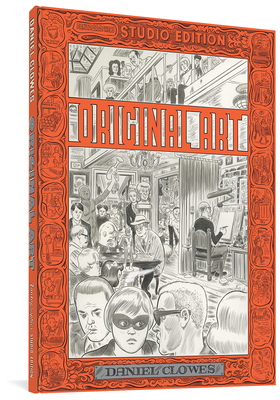 By Daniel Clowes
$175.00
Possibly out of print. Email or call to check availability and price.

This collection of raw, un-retouched original art gives insight into the creative and drawing processes of the Academy Award-nominated, internationally acclaimed cartoonist behind Patience and Ghost World.

Original Art: Daniel Clowes turns the spotlight on one of the medium’s most dynamic creators. A vital entry of the Fantagraphics Studio Edition series, this volume draws from Clowes’s nearly 30 years of comics art, ranging from his seminal one-man anthology, Eightball (in which Ghost World was originally serialized), to his most recent graphic novel, 2016’s best-selling time travel thriller, Patience.

The edition features over 150 pages of art from 1989–present, each reproduced as exact facsimiles of the original to best showcase every detail of the artist’s cartooning process. The book also includes new covers, endpapers, and other surprises from Clowes, including five unpublished pages of an abandoned graphic novel and an illustrated glossary of obsolete production techniques used for their original publication. The book also includes several tipped-in pages of clear acetate and vellum to perfectly approximate some of these production processes, making this a one-of-a-kind art object. Carefully curated by the artist himself, many of these pages have hung in museums around the country, and now you can enjoy them in your own library.

Daniel Clowes (b. 1961, Chicago, Illinois) is an American cartoonist. He is a multi-Harvey, Eisner, and Ignatz Award Winner, and his papers have been acquired by the University of Chicago library. His most recent book, Patience, has been translated into nineteen languages, and his books and comics have won numerous awards, including a PEN America Literary Award and over a dozen Harvey and Eisner Awards. As a screenwriter, he has been nominated for an Academy Award and written the films Ghost World (with Terry Zwigoff), Art School Confidential, and Wilson. A retrospective of his work, Modern Cartoonist, debuted in 2012, appearing at the Museum of Contemporary Art in Chicago, the Oakland Museum, and the Wexner Center. His illustrations have been featured on a wide-ranging array of posters, album covers, and magazines, including many covers for The New Yorker. He lives in Oakland, California, with his wife and son.

The Daniel Clowes aesthetic, delivered through his numerous comics, album covers, book illustrations and film work, has made a distinctive impression on the culture.
— The New York Times