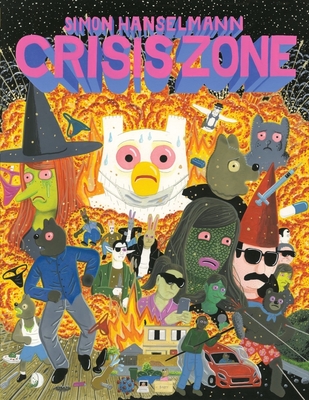 A very grotesque and brilliant interpretation of life at the start of COVID. Hanselmann is a supreme writer and has created some of the most obscure, lovable, and wacky characters. Hanselmann has truly adapted and refined his illustration style.

This is, to me, the definitive text of these COVID years. Hanselmann wrote, drew, painted, and posted a page to his Instagram every day during quarantine, and every day, I was equal parts horrified and delighted by the increasingly deranged antics of my favorite gang of supernatural slackers. Buy it for the reaction shots alone.

In March 2020, as the planet began to enter lockdown, acclaimed cartoonist Simon Hanselmann decided that what the world needed most was free, easily accessible entertainment, so he set out to make the greatest webcomic ever created! The result is also certain to be one of the most acclaimed and eagerly anticipated graphic novels of 2021.

As the Covid-19 pandemic continued to escalate far beyond any reasonable expectations, Crisis Zone escalated right alongside, in real time, with daily posts on Instagram. Crisis Zone's battle mission was to amuse the masses: no matter how horrible and bleak everything seemed, at least Werewolf Jones wasn’t in your house! Over the course of 2020, Crisis Zone has amassed unprecedented amounts of new fans to the Megg and Mogg universe and is presented here, unabridged and uncensored, with a slew of added pages and scenes deleted from the webcomic, as well as an extensive “Director’s Commentary” from Hanselmann himself.

Simon Hanselmann hails from Tasmania but resides with his family in Los Angeles, CA.  His bestselling New York Times series Megg, Mogg and Owl has been translated into thirteen languages, nominated for multiple Ignatz and Eisner awards, and won Best Series at the Angouleme International Comics Festival in 2018.

Born of generosity and desperation, Crisis Zone is the first great work of pandemic fiction.

Ultimately, Crisis Zone is a sensitive, sometimes funny, sometimes disturbing account of last year: a story about what it’s like to have terrible friends during a pandemic, and a reflection on how economic and political hopelessness collided to make that situation even worse.

Hanselmann is one of the most gifted cartoonists alive.
— The A.V. Club

Hanselmann proves the perfect author to capture American life in late 2020. His new volume escalates the depravity at a relentless pace and delivers both laugh-out-loud gags and genuine pathos.
— Library Journal (Starred Review)

In the deluxe and beautifully designed Fantagraphics edition, Crisis Zone ends up looking like a children’s book produced in an institution for the criminally insane. … Assuming we have a future ahead of us, Crisis Zone will be the keepsake to remind us what we became in [2020].

A delightfully bonkers read. If you're ever interested in revisiting that atmosphere of fear, uncertainty, and lockdown ennui with the benefit of hindsight, it's captured perfectly in Crisis Zone.

Hanselmann walks a razor-thin line of misery and hilarity in Crisis Zone. … this is arguably his biggest, strangest, and best work so far.

With equal parts twisted whimsy, reluctant introspection and emotionally-resonant tragicomedy, Crisis Zone at its core provides a stirring example of what a modern-day humorist can achieve when allowed total control of their own work with only one goal in mind: to entertain. A riveting if not offbeat (and somewhat grotesque) tale of woe, Hanselmann’s sardonic, take-no-prisoners commentary on modern isolation represents a new milestone in the comics medium for the totality of its bold approach.
— Screen Rant

From characters trying to escape the anxiety and pressures of pandemic life through the wonders of cyberspace, to becoming unexpected viral celebrities online, Crisis Zone blends comedy with biting satire.

Crisis Zone weaves in elements of action, comedy, horror, and soap-operatics in this tale that goes full speed ahead straight from the beginning.