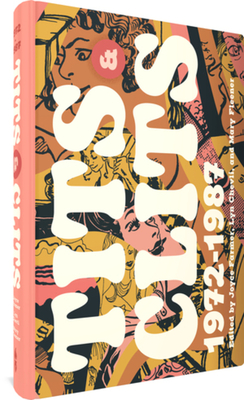 The groundbreaking, women-edited comics anthology that served as an antidote and rebuke to male-dominated underground comix is now collected in a single volume for the first time.

In 1972, underground cartoonists Joyce Farmer and Lyn Chevli produced Tits & Clits — a funny, rowdy, raucous underground comix series about female sexuality that one reviewer described as “the ultimate in vaginal politics” — and became the first American women ever credited with writing, drawing, and publishing their own comic books.


A feminist answer to Zap, Tits & Clits quickly became an anthology showcase for other women cartoonists, featuring the work of Mary Fleener, Roberta Gregory, Krystine Kryttre, Lee Marrs, Carel Moiseiwitsch, Trina Robbins, Dori Seda, among others. Like other underground comix, Tits & Clits leaned into being lewd in order to satirize women’s experiences with so-called sexual liberation. Featuring stories about birth control, abortion, menstruation, masturbation, and more, Tits & Clits featured intimate politics which occasionally clashed with contemporaneous feminist concepts about sex and sexuality.  As Chevli put it: their work had something to offend everyone. (In 1973, conservative legal authorities in Orange County deemed their work pornographic and even threatened the two editors with arrest on obscenity charges.)

Now, for the first time in half a century, a new generation of readers will be shocked, entertained, enlightened, and scandalized by the bold satirical cartoonists that comprised the band of sisters in Tits & Clits. In addition to reprinting the seven-issue run of the Tits & Clits series, this collection also includes in their entirety two classic solo comics from 1972 written and drawn by Farmer and Chevli — Abortion Eve and Pandora’s Box. Also included is an introductory essay providing context to Tits & Clits’ place in the history of women’s cartooning by the book’s editor, Samantha Meier.

Lyn Chevli (1931-2016) was born Marilyn Keith in Milford, Connecticut.  She (and her then-husband Dennis Madison) opened the bookstore Fahrenheit 451 in Laguna Beach in 1970. She subsequently partnered up with Joyce Farmer and formed Nanny Goat Productions. During her career as an underground cartoonist, Chevli romped in the surf with feminist Kate Millet, entertained Sergio Aragones, and partied with Gilbert Shelton, R. Crumb, S. Clay Wilson, Harvey Kurtzman and others. Lyn was also a sculptor, first welding on the balcony of her Park Ave apartment in a bikini and later working with mixed media, mostly bones. Her novel, Alida: An Erotic Novel appeared in 1981. She contributed essays to Words in Our Pockets: The Feminist Writers Guild Handbook (1981) and Herotica (1988).

Roberta Gregory is an American comic book writer and artist best known for the character Bitchy Bitch from her Fantagraphics Books series Naughty Bits. She is a prolific contributor to many feminist and underground anthologies, such as Wimmen's Comix and Gay Comix.

Retired underground cartoonist and current comics historian Trina Robbins has been writing graphic novels, comics, and books for almost half a century. Her subjects have ranged from Wonder Woman and The Powerpuff Girls to her own teenage superheroine, GoGirl!, and from women cartoonists and superheroines to women who kill. She's won an Inkpot Award and was inducted in the Will Eisner Hall of Fame at the San Diego Comic-Con. She lives in a moldering, 100+-year-old house in San Francisco with her cats, shoes, and dust bunnies.

Lee Marrs is an American cartoonist and animator, and one of the first female underground comix creators. She is best known for her comic book series The Further Fattening Adventures of Pudge, Girl Blimp and is one of the founders of the Wimmen’s Comix collective. In 1982, she received the comics industry’s Inkpot Award.

Samantha Meier is an archivist, editrix, and occasional public historian who lives and works in Flagstaff, Arizona. Her research on women’s underground comix began with her undergraduate honors thesis at Harvard College, Twisted Sisters: Women’s Comix and Cultural Action, which was awarded the 2012 James A. Davis Prize for Exemplary Thesis in Sociology. Meier’s writing on comix has appeared in various publications, including Bitch Media, Fusion, and the Women’s Review of Books, and she has presented her research at various academic conferences.