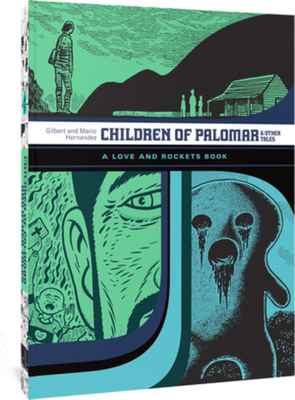 This comics omnibus includes the graphic novels Julio’s Day and The Children of Palomar, as well as never-before-collected work by brothers Mario and Gilbert Hernandez, some of which has never been available since its early 2000s run in comic book single issues.

Children of Palomar and Other Tales(the fifteenth volume in our Complete Love and Rockets Library omnibuses and the eighth Gilbert volume) begins with “Me for the Unknown,” uncollected since its original 2001–2004 run in Love and Rockets Vol. II comic books. Written by Mario Hernandez and drawn by Gilbert Hernandez, it traces the Rabelaisian journey of Tagg Lillard. A U.S. citizen with a seemingly perfect life working in Latin America, he escapes a death trap clutching important papers, and an imperious CEO and his manservant pursue him through a land plagued by colonialist/corporate greed. Also collected: one of their joints from 2008, “Chiro el Indio.” In The Children of Palomar suite of short stories (2006–2007; collected in 2013), there are many mysterious visitors, an apparition that haunts childless women, and readers learn how Chelo lost her eye. And in Julio’s Day, which originally ran from 2001–2008 and was collected in 2013, a man’s life—threaded with war, loss, illness, and forbidden love—spans a century.

Gilbert Hernandez was born in 1957 in Oxnard, California, and is considered one of the greatest living comics writer-artists in the world. In 1982, Hernandez co-created, along with his brothers Mario and Jaime, the ongoing, iconic, internationally acclaimed comic book series Love and Rockets, one of the greatest bodies of work the medium has ever seen. In addition to his work on Love and Rockets, its spinoffs, and side series, Hernandez has released a prodigious amount of original graphic novels and miniseries, such as Sloth, Bumperhead, and Marble Season. He also collaborated with Darwyn Cooke on The Twilight Children for DC. He was inducted into the Will Eisner Hall of Fame in 2017 and is the recipient of a Fellow Award from United States Artists and a PEN Center USA’s Graphic Literature Award for Outstanding Body of Work. Hernandez lives in Ventura, CA, with his wife and daughter.

Mario Hernandez (b. 1953, Oxnard, California) co-created Love and Rockets, the long-running, internationally acclaimed comic book series. In 1981, he and his younger brothers, Gilbert and Jaime, self-published the first Love and Rockets zine. The Hernandez brothers’ anthology title became Fantagraphics’ flagship comic in 1982 when the independent began publishing it. He drew and wrote the occasional story for Love and Rockets, such as “Somewhere in California,” and still contributes writing, story ideas, and dialogue. In 1993, his one-shot solo comic, Brain Capers, was published, and he worked on projects such as Mr. X, Citizen Rex, and the anthology Real Girl. He won an Inkpot Award in 2012 and lives in Portland, Oregon, with his wife and children.