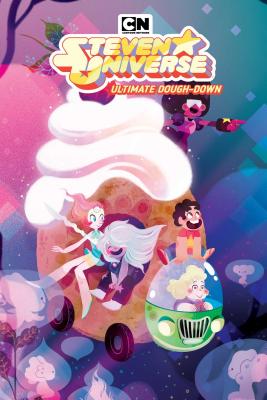 With Sadie running the Big Donut on her own, it’s up to Steven and the Gems to help her win the annual Ultimate Doughnut Dough-Down competition in Empire City!

Steven and the Crystal Gems have faced down intergalactic empires, but are they ready to win a donut competition? With Lars in space that means Sadie is on her own...unless the Crystal Gems come to help! It’s up to Steven and the Gems to step in and help Sadie run the Big Donut food truck during the annual competition in Empire City. They’ll have to work together to best the other chefs in the Ultimate Dough-Down, especially King Kruller, one of the hippest shops around and the Dough-Down’s reigning champs.

Rebecca Sugar is an American animator, director, screenwriter, producer, and songwriter. She is well known for creating the Cartoon Network series Steven Universe, which has made her the first woman to independently create a series for the network. Sugar was formerly a writer and storyboard artist on the animated television series Adventure Time, until 2013. Her work on the two series has earned her five Primetime Emmy Award nominations.