He Came in with It: A Portrait of Motherhood and Madness (Paperback) 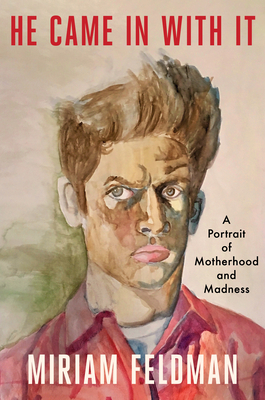 By Miriam Feldman
$22.99
Not in stock. Available To Order.

"...a cleansing narrative that should inspire mothers--and other caregivers--to rise up, unite, and breathe hot new life into the drooping cause of mental healthcare reform."-- Ron Powers, Pulitzer Prize-winning journalist and New York Times best-selling author.

"To know that you are not alone in this loneliest and most emotionally difficult of all family situations is a great gift, a comfort and source of strength. And Mimi Feldman is the one you want as your mentor, your guide."-- Janet Fitch, New York Times best-selling author of White Oleander

"...a compelling, moving story...It was an honor to read it."-- Jenny Allen, author of Would Everyone Please Stop

In an idyllic Los Angeles neighborhood, where generations of families enjoy deep roots in old homes, the O'Rourke family fits right in. Miriam and Craig are both artists and their four children carry on the legacy. When their teenage son, Nick, is diagnosed with schizophrenia, a tumultuous decade ensues in which the family careens permanently off the conventional course.

Like the ten Biblical plagues, they are hit by one catastrophe after another, violence, evictions, arrests, a suicide attempt, a near-drowning...even cancer and a brain tumor...play against the backdrop of a wild teenage bacchanal of artmaking and drugs. With no time for hand-wringing, Miriam advances, convinced she can fix everything, while a devastated Craig retreats to their property in rural Washington State as home becomes a battlefield.

It is while cleaning out a closet, that Miriam discovers a cache of drawings and journals written by Nick throughout his spiral into schizophrenia. She begins a solitary forensic journey into the lonely labyrinth of his mind.

This is the story of how mental illness unspools an entire family. As Miriam fights to reclaim her son from the ruthless, invisible enemy, we are given an unflinching view into a world few could imagine. It exposes the shocking shortfalls of our mental health system, the destructive impact of stigma, shame and isolation, and, finally, the falsity of the notion of a perfect family. Throughout the book, it is the family's ability to find humor in the absurdities of this life that saves them. It is a parable that illustrates the true definition of a good life, allowing for the blemishes and mistakes that are part of the universal human condition. He Came In With It is the legacy of, and for, her son Nick.