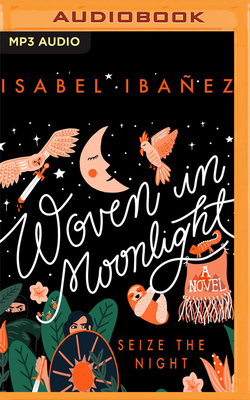 By Isabel Ibañez, Ana Osorio (Read by)
$29.99
Possibly out of print. Email or call to check availability and price.

A lush tapestry of magic, romance, and revoluci n, drawing inspiration from Bolivian politics and history.

"A lush, vibrant feast of a book." (Margaret Rogerson, NYT best-selling author of An Enchantment of Ravens)

"A wholly unique book for the YA shelf." (Adrienne Young, NYT best-selling author of Sky in the Deep)

Ximena is the decoy Condesa, a stand-in for the last remaining Illustrian royal. Her people lost everything when the usurper, Atoc, used an ancient relic to summon ghosts and drive the Illustrians from La Ciudad. Now Ximena's motivated by her insatiable thirst for revenge, and her rare ability to spin thread from moonlight.

When Atoc demands the real Condesa's hand in marriage, it's Ximena's duty to go in her stead. She relishes the chance, as Illustrian spies have reported that Atoc's no longer carrying his deadly relic. If Ximena can find it, she can return the true arist crata to their rightful place.

She hunts for the relic, using her weaving ability to hide messages in tapestries for the resistance. But when a masked vigilante, a warm-hearted princesa, and a thoughtful healer challenge Ximena, her mission becomes more complicated. There could be a way to overthrow the usurper without starting another war, but only if Ximena turns her back on revenge - and her Condesa.