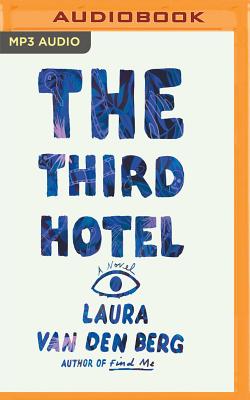 By Laura Van Den Berg, Bailey Carr (Read by)
$14.99
Possibly out of print. Email or call to check availability and price.

“The Third Hotel has a dreamy, suspenseful quality that lulled me into an otherworldly state. Clare, who recently lost her husband to a freak accident, goes to Havana to a horror film festival he was signed up to attend. While she is taking in the sights and going to film parties, she thinks she spies her husband. This begins a metaphysical journey of grief, loss, and regret as Clare stalks him and remembers their relationship, and is forced to question what is real and what really matters. A haunting, lovely novel that is worth a second reading.”
— Jason Kennedy, Boswell Book Company, Milwaukee, WI

In Havana, Cuba, a widow tries to come to terms with her husband's death - and the truth about their marriage - in Laura van den Berg's surreal, mystifying story of psychological reflection and metaphysical mystery.

Shortly after Clare arrives in Havana, Cuba, to attend the annual Festival of New Latin American Cinema, she finds her husband, Richard, standing outside a museum. He's wearing a white linen suit she's never seen before, and he's supposed to be dead. Grief-stricken and baffled, Clare tails Richard, a horror film scholar, through the newly tourist-filled streets of Havana, clocking his every move. As the distinction between reality and fantasy blurs, Clare finds grounding in memories of her childhood in Florida and of her marriage to Richard, revealing her role in his death and reappearance along the way. The Third Hotel is a propulsive, brilliantly shape-shifting novel from an inventive author at the height of her narrative powers.