Leaps of Faith: An Immigrant's Odyssey of Struggle, Success, and Service to his Country (Hardcover) 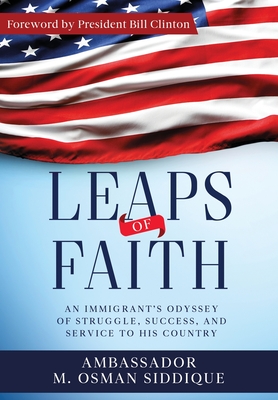 When he was appointed ambassador to Fiji, M. Osman Siddique imagined waving the U.S. flag with one hand while holding a pi a colada in the other. How could he have known the dream job would land him in the middle of a paramilitary coup? It's just one more enthralling chapter in the remarkable life of a Bangladeshi immigrant who came to the United States to find the American dream. And find it, he did. First as a hugely successful entrepreneur, and then as America's first serving Muslim ambassador. Through it all, he gained an appreciation for the U.S. unique to those who come to the country from elsewhere, an appreciation for the freedoms established by the Founding Fathers and guaranteed by the Constitution--"The miracle of America."

Leaps of Faith: An Immigrant's Odyssey of Struggle, Success, and Service to his Country is the delightful memoir of a man humbled by the possibilities of his new land and by the opportunities he discovered--in business, in love, in family, and, ultimately, in government service. Ambassador Siddique reflects on his past, and looks to the future--his future and the future of America. In the turbulent seas of our times, can America continue to be the beacon of hope for the world that it was to him?