Paying for It (Paperback) 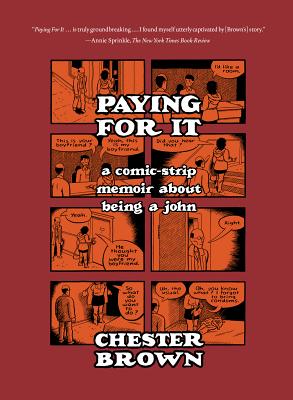 By Chester Brown
$19.95
Possibly out of print. Email or call to check availability and price.

The critically lauded memoir about being a john, available in paperback for the first time!

Paying for It was easily the most talked-about and controversial graphic novel of 2011, a critical success so innovative and complex that it received two rave reviews in The New York Times and sold out of its first print run in just six months. Chester Brown's eloquent, spare artwork stands out in this paperback edition.
Paying for It combines the personal and sexual aspects of Brown's autobiographical work (I Never Liked You, The Playboy) with the polemical drive of Louis Riel. He calmly lays out the facts of how he became not only a willing participant in but also a vocal proponent of one of the world's most hot-button topics—prostitution. While this may appear overly sensational and just plain implausible to some, Brown's story stands for itself. Paying for It offers an entirely contemporary exploration of sex work—from the timid john who rides his bike to his escorts, wonders how to tip so as not to offend, and reads Dan Savage for advice, to the modern-day transactions complete with online reviews, seemingly willing participants, and clean apartments devoid of clichéd street corners, drugs, or pimps.
Complete with a surprise ending, Paying for It continues to provide endless debate and conversation about sex work.

Chester Brown lives in Toronto, where he ran for parliament in the general election as a member of the Libertarian Party of Canada. He is the author of I Never Liked You, Louis Riel, and The Playboy.

“[Brown] makes as convincing a case for the decriminalization and destigmatization of prostitution as anyone I've ever come across in the prostitutes' rights movement.” —Annie Sprinkle, The New York Times

“Paying for It [is a] body-and-soul-baring memoir that is sure to stimulate strong reactions.” —Heller McAlpin, NPR