New York Postcards: 30 Illustrations from the Pages of The New Yorker and Beyond (Paperback) 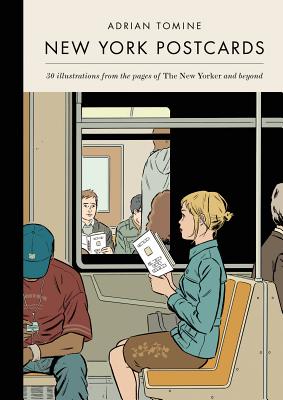 By Adrian Tomine
$14.95
Possibly out of print. Email or call to check availability and price.

Iconic postcards from a beloved illustrator


Adrian Tomine (Shortcomings, Scenes from an Impending Marriage) has forged countless iconic images of New York City in his career as an illustrator. A master of conveying an entire story with a single panel, his covers for The New Yorker are beloved by New Yorkers and non–New Yorkers alike, as much for their frank yet charming portrayal of life in the big city as for their flawless design and gorgeous linework.
New York Postcards celebrates thirty of Tomine's most well-known illustrations, and is a loving homage to the city that Tomine, a West Coast transplant, has called home for the past eight years.

“In [Tomine's] illustrations, Edward Hopper–like situations--of dogs under disused railway bridges, or people on a street corner--take on a wry edge.” —The Economist

“Tomine explores New York's culture and its passing moments, asking us to reflect on the city's quirks and tenderness.” —The New Yorker