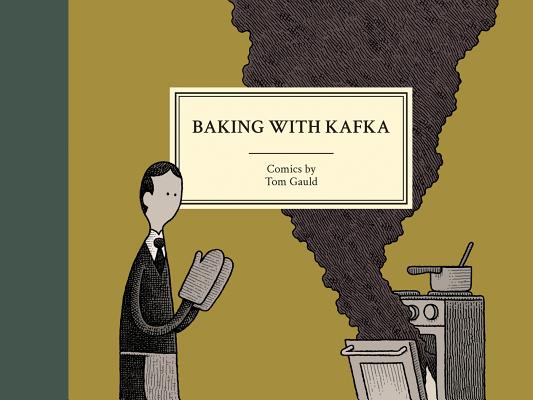 In his inimitable style, British cartoonist Tom Gauld has opened comics to a crossover audience and challenged perceptions of what the medium can be. Noted as a “book-lover’s cartoonist,” Gauld’s weekly strips in The Guardian, Britain’s most well-regarded newspaper, stitch together the worlds of literary criticism and pop culture to create brilliantly executed, concise comics. Simultaneously silly and serious, Gauld adds an undeniable lightness to traditionally highbrow themes. From sarcastic panels about the health hazards of being a best-selling writer to a list of magical items for fantasy writers (such as the Amulet of Attraction, which summons mainstream acceptance, Hollywood money, and fresh coffee), Gauld’s cartoons are timely and droll—his trademark British humour, impeccable timing, and distinctive visual style sets him apart from the rest.

Lauded both for his frequent contributions to New Scientist, The Guardian and The New York Times, and his Eisner-nominated graphic novels, Tom Gauld is one of the most celebrated cartoonists working today. In Baking with Kafka, he proves this with one witty, sly, ridiculous comic after another.

Tom Gauld is a cartoonist and illustrator. He has weekly comic strips in The Guardian and New Scientist and his comics have been published in The New York Times and The Believer. In addition to his graphic novels Goliath, You’re All Just Jealous of My Jetpack, and Mooncop, he has designed a number of book covers. Gauld lives and works in London.

"Tom Gauld cooks up clever cartoons that have everything to do with books and little to do with food. These satirical, bibliocentric comics, most of which first appeared in The Guardian, puncture current literary trends and pretensions."—NPR, Best Books of 2017

"Gauld’s artwork appeals to me most as a book lover: each piece teases out jokes inherent to the science fiction or literature communities, equally decrying literary snobbery and pedantic fans."—The Verge

"Gauld is able to speak volumes about modern politics, book culture and more. His comics are quippy, slightly sardonic takes that go down easy because they’re so darn cute — but will make you think long after you’ve left them [turning a] wry eye onto politicians, angry mobs, capitalism and conspiracy theorists, to name a few."—
Huffington Post

"The world of books may not seem like the most immediately obvious source of humor, but Tom Gauld's Baking With Kafka could change that."—The Hollywood Reporter

"The perfect gift for the literature graduate in your life."—Bookriot

"A must-have book for any bibliophile with anything even approaching a sense of humor ... books that often skewer, albeit somewhat gently and always with an insider’s precision, world literature and the world of literature and all the odd habits of authors and readers—a bookish graphic anodyne for these digitized and clickbaity times. Highly recommended."—The Austin Chronicle

"There’s plenty in Baking With Kafka for both writer and reader to share [in] their love of the written word in all its permutations and possibilities."—Popzara

"Gauld’s simple, almost cute drawing style stands in contrast to his comics’ content, adding an extra dose of humor ... [his] comments on 21st-century culture may be sadly true ... his jabs at politics his most poignant."—Hyperallergic

"A delightful collection of recent work. Filled with clever references and humorous observations, all told in his usual timeless style, Baking with Kafka offers something both refreshingly new and comfortingly familiar."—booooooom.com