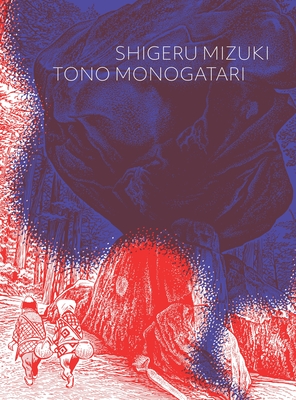 A beautiful adaptation by the creator of the Yokai comics Kitaro. Tono Monogatari is a collection of folktales from the Tono region of Japan, collected 1910. Mizuki hoped to retrace the footsteps of the folklorists that collected the stories however he was too old, the work he created is his loving retelling of some of the most famous stories of the Yokai as well as his meeting between himself and Kunio Yanagita one of the original researches that collected the stories. The artwork is absolutely beautiful

Shigeru Mizuki—Japan’s grand master of yokai comics—adapts one of the most important works of supernatural literature into comic book form. The cultural equivalent of the fairy tales of the Brothers Grimm, Tono Monogatari is a defining text of Japanese folklore and one of the country’s most important works of literature. This graphic novel was created during the later stage of Mizuki’s career, after he had retired from the daily grind of commercial comics to create personal, lasting works of art.

Originally written in 1910 by folklorists and field researchers Kunio Yanagita and Kizen Sasaki, Tono Monogatari celebrates and archives legends from the Tono region. These stories were recorded as Japan’s rapid modernization led to the disappearance of traditional culture. This adaptation mingles the original text with autobiography: Mizuki attempts to retrace Yanagita and Sasaki’s path, but finds his old body is not quite up to the challenge of following in their footsteps. As Mizuki wanders through Tono he retells some of the most famous legends, manifesting a host of monsters, dragons, and foxes. In the finale, Mizuki meets Yanagita himself and they sit down to discuss their works.

Translated and with additional essays by Mizuki scholar Zack Davisson, Tono Monogatari displays Mizuki at his finest, exploring the world he most cherished.

Born March 8, 1922 in Sakaiminato, Tottori, Japan, Shigeru Mizuki is a specialist in stories of yokai and is considered a master of the genre. He is a member of the Japanese Society of Cultural Anthropology, and has traveled to more than sixty countries around the world to engage in fieldwork on the yokai and spirits of different cultures. He has been published in Japan, South Korea, France, Spain, Taiwan, and Italy. His award-winning works include Kitaro,Nonnonba, and Onward Towards Our Noble Deaths. Mizuki's four-part autobiography and historical portrait Showa: A History of Japan won an Eisner Award in 2015.

"Mizuki (NoNonBa) adapts Kunio Yanagita’s 1910 folklore history of yokai, or spirits, into an energetic series of manga vignettes that are often silly and sometimes genuinely terrifying... The acrobatic visuals lend these fables a giddy charm, and the inviting collection opens up Japanese history for a broader readership."
—Publishers Weekly

"Tono Monogatari opens the door to a new way of experiencing Japan’s history and culture. Pick up a copy of this collection, read it, and share with others like the book itself requests: 'May the legends continue to be told.'"
—The Arkansas International

"[Mizuki's] re-imagining provides an enjoyable gateway into the world of Japanese folklore, proving there’s still some life in these old spirits yet."—International Examiner

"In the face of a shifting culture, Yanagita memorialized the stories passed down through generations within the pages of Tono Monogatari. These yokai stories continue to live on in spite of active efforts to undermine their power, and with Mizuki’s adaptation of this enduring text, the stories have gained new life."
—Pop Matters