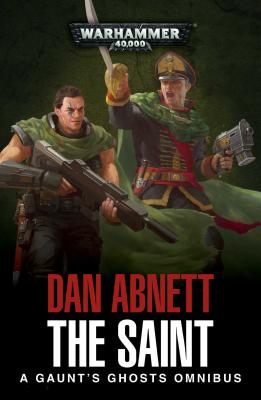 In the blood-soaked Sabbat Worlds Crusade, the massed ranks of the Imperium battle the dark forces of Chaos for dominion. At the forefront of this conflict are the Astra Militarum - untold numbers of ordinary Imperial Guard soldiers fighting to preserve the Emperor's holy realm. Colonel-Commissar Ibram Gaunt and the men of the Tanith First-and-Only are at the heart of this struggle, their specialist scouting role earning them the nickname 'the Ghosts'. From the holy world of Hagia to Phantine's aerial dome cities and the mud-filled trenches of Aexe Cardinal, Gaunt's Ghosts find themselves in the thick of the fighting time and again, charged with the most dangerous missions the crusade's commanders care to throw at them.

Dan Abnett has written over fifty novels, including Anarch, the latest instalment in the acclaimed Gaunt’s Ghosts series. He has also written the Ravenor and Eisenhorn books, the most recent of which is The Magos. For the Horus Heresy, he is the author of Horus Rising, Legion, The Unremembered Empire, Know No Fear and Prospero Burns, the last two of which were both New York Times bestsellers. He also scripted Macragge’s Honour, the first Horus Heresy graphic novel, as well as numerous Black Library audio dramas. Many of his short stories have been collected into the volume Lord of the Dark Millennium. He lives and works in Maidstone, Kent.