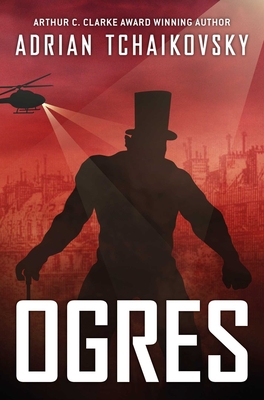 By Adrian Tchaikovsky
$30.00
Possibly out of print. Email or call to check availability and price.

A bleak glimpse of a world of savage tyrants, from award-winning author Adrian Tchaikovsky in a beautiful signed, limited-edition hardcover.

It’s always idyllic in the village until the landlord comes to call.

Because the landlord is an Ogre. And Ogres rule the world, with their size and strength and appetites. It’s always been that way. It’s the natural order of the world. And they only eat people sometimes.

But when the headman’s son, Torquell, dares lift his hand against the landlord’s son, he sets himself on a path to learn the terrible truth about the Ogres, and about the dark sciences that ensured their rule.

Adrian Tchaikovsky is the author of the acclaimed ten-book Shadows of the Apt series, the Echoes of the Fall series, and other novels, novellas and short stories including Children of Time (which won the Arthur C. Clarke award in 2016), and its sequel, Children of Ruin (which won the British Science Fiction Award in 2020). He lives in Leeds in the UK and his hobbies include entomology and board and role-playing games.

"Tchaikovsky sharply addresses the connection between class and climate, weaving pressing ethical questions into a thrilling adventure. This is a must-read for fans of dystopian and climate change fiction." -- Publishers Weekly on Firewalkers, starred review
— Publishers Weekly

"A masterclass in concise storytelling." -- ScFiNow on Firewalkers
— SciFiNow

"Every chapter throws fresh surprises at the reader, continually opening out the scope of the novel, and the imagery is wonderfully vivid throughout... Tchaikovsky focuses the taut story in such a way that every detail is relevant, building towards a climax that doesn’t feel possible at the beginning but which, by the end, feels like a perfect pay-off." -- SFX Magazine on Firewalkers
— SFX Magazine

"A grim picture of a possible future, a diverse cast of interesting and distinct characters, a dollop of mystery and technological shenanigans. There’s some good action, tricksy AI, and a satisfying ending. Recommended." -- Civilian Reader on Firewalkers
— Civilian Reader

"The wars of Tchaikovsky’s future are brutal, inhuman, and strangely awe-inspiring in their horror." -- Liz Bourke, Locus Magazine on Ironclads
— Liz Bourke

"Ironclads dramatises the conflicts between rich and poor, right and left, public and private in a brutally satirical fashion. At the same time, it’s an enormously entertaining story." -- SFcrowsnest on Ironclads
— SFcrowsnest