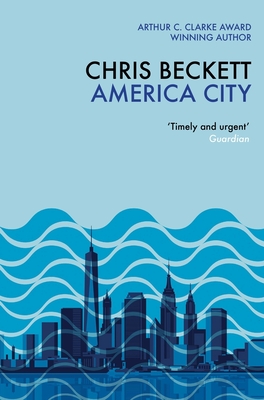 By Chris Beckett
$15.95
Possibly out of print. Email or call to check availability and price.

America, one century on: a warmer climate is causing vast movements of people. Droughts, floods and hurricanes force entire populations to simply abandon their homes. Tensions are mounting between north and south, and some northern states are threatening to close their borders against homeless fellow-Americans from the south. Against this backdrop, an ambitious young British-born publicist, Holly Peacock, meets a new client, the charismatic Senator Slaymaker, a politician whose sole mission is to keep America together, reconfiguring the entire country in order to meet the challenge of the new climate realities as a single, united nation. When he runs for President, Holly becomes his right hand woman, doing battle on the whisperstream, where stories are everything and truth counts for little. But can they bring America together—or have they set the country on a new, but equally devastating, path?

Chris Beckett is the winner of the Edge Hill Short Fiction Award, 2009, for "The Turing Test," the prestigious Arthur C. Clarke Award, 2013, for Dark Eden and was shortlisted for the British Science Fiction Association Novel of the Year Award for Mother of Eden in 2015 and for Daughter of Eden in 2016.

"An uneasy read that manages to feel both timely and urgent. . . . Beckett offers an intelligent, visceral reminder that unless we change what today looks like, tomorrow will be turbulent indeed." —Guardian

"America City is beautifully written, inventive, with a strong cast of characters . . . and a plot that makes the reader think, and is another great book from one of the best writers around." —Concatenation

"Compelling . . . a grim demonstration of how one person can change history, but not control it." —SFX

"Whilst America City could be called a climate-change novel, it is much more than that. The droughts, storms, and floods provide the context in which questions about identity, crafting story, creating and manipulating political events and policy, and exploring tensions in friendships and relationships, occur. It is an intelligent and compelling novel which through well-plotted story—and complex, believable, and interesting characters—explores one possible scenario, and in the process introduces its various and rather more universal themes. . . . America City bears comparison with another, recent, brilliant novel focused on climate change in twenty-second-century America: New York 2140 by Kim Stanley Robinson, also published in 2017. . . . Both are expertly written in their different approaches." —Strange Horizons

"Readers looking for a new and hauntingly realistic dystopia will find plenty to enjoy, question, and ponder." --Publishers Weekly