The Origin of Capitalism: A Longer View (Paperback) 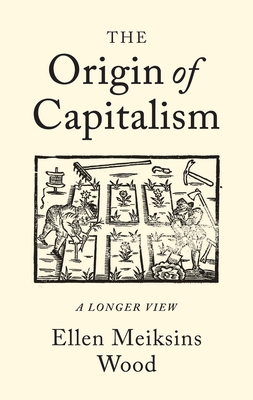 An expanded new edition of the classic, pithy account of capitalism’s origins—“a must read” for students of political theory and anyone interested in economic thought (Choice)

How did the dynamic economic system we know as capitalism develop among the peasants and lords of feudal Europe?

In The Origin of Capitalism, a now-classic work of history, Ellen Meiksins Wood offers readers a clear and accessible introduction to the theories and debates concerning the birth of capitalism, imperialism, and the modern nation state. Capitalism is not a natural and inevitable consequence of human nature, nor simply an extension of age-old practices of trade and commerce. Rather, it is a late and localized product of very specific historical conditions, which required great transformations in social relations and in the relationship between humans and nature.

This new edition is substantially revised and expanded, with extensive new material on imperialism, anti-Eurocentric history, capitalism and the nation-state, and the differences between capitalism and non-capitalist commerce. The author traces links between the origin of capitalism and contemporary conditions such as ‘globalization’, ecological degradation, and the current agricultural crisis.

Ellen Meiksins Wood (1942–2016), for many years Professor of Political Science at York University, Toronto, was the author of many books, including Democracy Against Capitalism, The Pristine Culture of Capitalism, The Origin of Capitalism, Peasant–Citizen and Slave, Citizens to Lords, Empire of Capital and Liberty and Property.

“The Origin of Capitalism was one of those ‘Aha!’ moments. Wood was an extraordinarily rigorous and imaginative thinker, someone who breathed life into Marxist political theory and made it speak—not to just to me but to many others—at multiple levels: historical, theoretical, political.”
—Corey Robin, Jacobin

“The writing is so supple and accessible, and the argument so persuasive, it’s like watching a cloudy mixture of ideas being turned into a clear solution.”
—Adrienne Rich

“This extremely valuable book offers an insightful tour of the historical debates surrounding the transition from feudalism to capitalism … a must-read for anyone with even the remotest interest in the origins of capitalism, or economic thought in general, from undergraduates through professionals.”
—Choice

“Brilliant book … Into the central thread of her argument, Ellen Meiksins Wood has woven a wonderfully rich texture of comment on the arguments and debates that preceded her … not just a valuable new interpretation of an old history, it carries important lessons for our own times.”
—Spokesman