The Great Firewall of China: How to Build and Control an Alternative Version of the Internet (Hardcover) 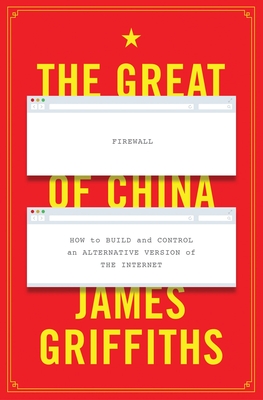 Once little more than a glorified porn filter, China’s ‘Great Firewall’ has evolved into the most sophisticated system of online censorship in the world. Even as the Chinese internet grows and online businesses thrive, speech is controlled, dissent quashed, and any attempts to organize outside the official Communist Party are quickly stamped out. Some are able to bypass the wall using VPNs, but this creates further a further divide between an intellectual class and the population at large, as those without the resources or digital knowhow are left in the dark. And there are hints that President Xi Jinping will soon fill in these leaks in the wall.
As censorship, distortion, and fake news gain traction around the world, James Griffiths takes a look inside the Great Firewall and explores just how far it has spread. He looks at how internet giants like Google and Facebook are bowing to pressure and agreeing to compromise internet freedoms in pursuit of the burgeoning Chinese market. Griffiths also shows how the spread of Chinese influence around the globe is tied to an increasing worldwide crackdown in online freedom. One of China’s most insidious exports are its censorship techniques, and its Firewall is an inspiration for aspiring autocrats the world over.
Griffiths pushes back on the longstanding excuse that the internet is too big to be contained and makes the case that censorship tools are becoming more sophisticated at the very same time that users are becoming more complacent. His book is a caution to anyone who believes in a free and open internet and call to action for a radical new vision of online liberty.

James Griffiths is a reporter and producer for CNN International, currently based in Hong Kong. He has reported from Hong Kong, China, South Korea, and Australia for outlets including the Atlantic, Vice, and the Daily Beast. He was previously a reporter and assistant editor at the South China Morning Post, where he played a key role in the paper’s award winning coverage of the 2014 Umbrella Movement protests in Hong Kong.

“Why did so many fail to anticipate that the Communist Party would extend its control over cyberspace as it had over physical space? And how, exactly, has the Chinese government created its own heavily surveilled domestic intranet? In The Great Firewall of China, James Griffiths traces the development of Chinese cyberauthoritarianism and censorship from the 1990s to the present. In his useful but alarming account, Griffiths, a journalist for CNN based in Hong Kong, explains why the Communist Party came to focus on internet control and how the pieces of the Great Firewall function.”
— Wall Street Journal

“The internet has long been a boon for the free exchange of information, but Griffiths argues that China’s success at monitoring and censoring web traffic poses a cautionary tale for users around the world.”
— New York Times

“The book is well worth a read for anyone who wants to know more generally about online censorship, China's emerging social credit system, and the concept of cyber-sovereignty (in which each nation controls its own Internet). Griffiths also provides food for thought for the coming conversations about human rights online and whether and how we can regulate the Internet in a way that serves the common good.”
— Forbes

“Griffiths has written an even-handed history of the internet in China that is as critical of censors there as it is of the profit-driven US tech industry.”
— South China Morning Post

“The definitive guide to the development of the internet in China. Griffith's book is also an urgent and much needed reminder about how China's quest for cyber sovereignty is undermining global internet freedom.”
— Kristie Lu Stout, host of CNN’s News Stream and On China

“A gripping and illuminating account of how the Chinese state fell in and out of love with the internet—and what it means for China and for the rest of the world.”
— Jonathan Sullivan, director of the China Policy Institute

“A savvy journalist with a keen eye for the telling anecdote and an interest in big questions, Griffiths skillfully traces China’s efforts to control the internet. He also makes important moves beyond China's borders to highlight the global implications.”
— Jeffrey Wasserstrom, coauthor of China in the 21st Century: What Everyone Needs to Know

“Griffith has written an important and incisive history of the Chinese internet that introduces us to the government officials, business leaders, and technology activists struggling over access to information within the Great Firewall.”
— Adam M. Segal, author of The Hacked World Order

“Readers will come away startled at just how fragile the online infrastructure we all depend on is and how much influence China wields—both technically and politically.”
— Jason Q. Ng, author of Blocked on Weibo

“Exhaustively researched and wonderfully written, the book moves effortlessly between gripping narratives from the frontlines of digital struggle to trenchant analysis of the formation and evolution of China’s Great Firewall.”
— Eli Friedman, Cornell University