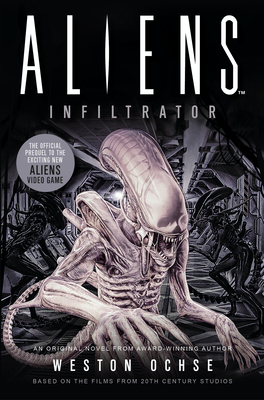 The official prequel to the huge new Alien video game, Aliens: Fireteam Elite from Cold Iron Studios. A Weyland-Yutani scientist arrives at Pala Station and finds the researchers there courting disaster… of the Xenomorph kind.


The official prequel to the new Alien video game from Cold Iron Studios. Dr. Timothy Hoenikker arrives on Pala Station, a Weyland-Yutani facility. Lured there by the promise of alien artifacts, instead he finds a warped bureaucracy and staff of misfits testing the effects of Xenomorph bio-materials on living creatures. Unbeknownst to the personnel, however, there is an infiltrator among them whose actions could spell disaster.

Also on staff is Victor Rawlings, a former marine who gathers together other veterans to prepare for the worst. As Pala Station receives a delivery of alien eggs, the experiments spin out of control, and only the former Colonial Marines stand between the humans and certain death.

Weston Ochse's military supernatural series SEAL Team 666 has been optioned for a feature film, and his SF trilogy that began with Grant Life received praise for its depiction of soliders at peace and at war. A veteran who served in Afghanistan, his licensed fiction includes Predator, Aliens, X-Files, Hellboy and V-Wars. Holding a master's degree in creative writing, Weston teaches at Southern New Hampshire University.

"A fast, fun read that sets up the plot of the video game well"—Polygon

"Relishes in the lore-expanding big picture, and in the small, horrible and murderous intimate moments... fun, scary and satisfying"—Adventures in Poor Taste

"This is Saw meets Alien, a gory, violence-filled revisit to a classic sci-fi horror work, H.G. Wells’ The Island of Doctor Moreau" —borg.com

"Horror fans will be drawn in by Ochse's cool, collected writing style and then blown away when he peels back reality's skin to uncover the supernatural terrors lurking just beneath the surface."—Publishers Weekly

"Ochse's writing finds the beauty in the language of brutality, which will appeal to fans of Blood Meridian by Cormac McCarthy." —Booklist on Burning Sky

"A wild blend of nail-biting thriller action and out-of-the shadows horror. This is the supernatural thriller at its most dynamic. Perfect!"—Jonathan Maberry, New York Times bestselling author of Dead of Night