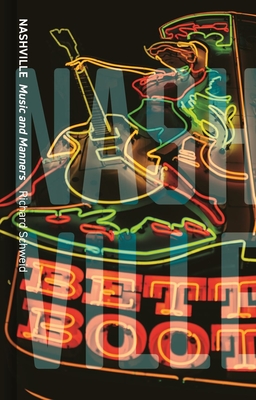 Nashville is a city of sublime contrasts, an intellectual hub built on a devotion to God, country music, and the Devil’s pleasures. Refined and raucous, it has long represented both culture and downright fun, capable of embracing pre–Civil War mansions and manners, as well as honky-tonk bars and trailer parks. Nouvelle cuisine coexists with barbeque and cornbread; the Frist Museum of Contemporary Art is near the Country Music Hall of Fame and Museum. Nashville has, in less than eighty years, transformed from a small, conservative, Bible-thumping city into a booming metropolis. Nashvillian Richard Schweid tells the history of how it all came to pass and colorfully describes contemporary Nashville and the changes and upheavals it has gone through to make it the South’s most exciting and thriving city.

Richard Schweid is a journalist and documentarian living in Barcelona. He is the author of many books, including Consider the Eel: A Natural and Gastronomic History, Che's Chevrolet, Fidel's Oldsmobile: On the Road in Cuba, and Hereafter: Searching for Immortality.

"Schweid's entertaining and informative, with the kind of style that might be described as conversational, but that’s too facile. Conversations are rarely as agreeably structured as his prose. He’s also well-suited for this particular topic. A Nashville native and Hillsboro High graduate who now lives in Barcelona and Rhode Island, he brings to the table his own experience during some of Nashville’s turning-point years. . . . All that transformation is not without its tensions, he notes. '[S]ome Nashvillians worry that their city’s relaxed charm is imperiled by so much growth and development,' he writes. 'It is this struggle that defines the city today.' Ain’t that the truth."
— Nashville Ledger

“Authentic and insightful, Schweid’s new book chronicles how Nashville became America’s ‘It City,’ a hub of entertainment and culture—a place advocates of the New South never foresaw. A must-read for natives and visitors alike.”
— Frank Sutherland, former editor-in-chief of "The Tennessean"