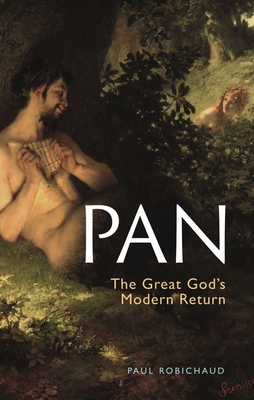 From ancient myth to contemporary art and literature, a beguiling look at the many incarnations of the mischievous—and culturally immortal—god Pan.

Pan—he of the cloven hoof and lustful grin, beckoning through the trees. From classical myth to modern literature, film, and music, the god Pan has long fascinated and terrified the western imagination. “Panic” is the name given to the peculiar feeling we experience in his presence. Still, the ways in which Pan has been imagined have varied wildly—fitting for a god whose very name the ancients confused with the Greek word meaning “all.” Part-goat, part-man, Pan bridges the divide between the human and animal worlds. In exquisite prose, Paul Robichaud explores how Pan has been imagined in mythology, art, literature, music, spirituality, and popular culture through the centuries. At times, Pan is a dangerous, destabilizing force; sometimes, a source of fertility and renewal. His portrayals reveal shifting anxieties about our own animal impulses and our relationship to nature. Always the outsider, he has been the god of choice for gay writers, occult practitioners, and New Age mystics. And although ancient sources announced his death, he has lived on through the work of Arthur Machen, Gustav Mahler, Kenneth Grahame, D. H. Lawrence, and countless others. Pan: The Great God’s Modern Return traces his intoxicating dance.

A native of Toronto, Paul Robichaud is professor and chair of English at Albertus Magnus College in New Haven, Connecticut. He is the author of David Jones, the Middle Ages, and Modernism, and his poems have appeared in various magazines, including Agenda and the Hudson Review.

"A fascinating account of a strange god with meme-like reach across the ages, and a study in the temporal shapeshifting of mythology itself."
— Spectator

"The multiple identities and reincarnations of Pan are eloquently examined by Robichaud in this fascinating book. Every age has its own version of Pan that echoes his Greek origins. . . . This book is probably the most extensive study of Pan attempted. And it’s very well written. Robichaud is not only an academic but a published poet and it shows in the elegance of his sentences—sensitive and careful attention is given to the shades of meaning attached to Pan. . . . And it’s not just the words but the images that captivate. The book has a generous number of color illustrations. . . . If you are looking for a pleasurable source book on everything about Pan then Robinchaud’s is it. An important and self-recommending study. I loved it."
— Alan Price

"It is this long history of variation in both what he is and what he represents that Robichaud‘s recent book Pan: The Great God’s Modern Return explores. By examining how the god has been understood and represented down through history, Robichaud presents a multifaceted and remarkably changeable portrait of a deity whose history is filled with mysteries, tricks, and turnings as represented in the wealth of stories, songs, and images in which he has appeared. . . . Very interesting—as well as enlightening."
— Well-read Naturalist

“If you are interested in Pan in any way, from his presence in literature or art to his magical presence in myth and vision, and the myriad ways that his shape flits throughout human history, be it on the edges or in our midst, then Pan: The Great God’s Modern Return is simply a must-purchase. It is, without doubt, the most wide-ranging treatment of the goat-foot god I’ve ever read, combining thorough attention to detail and research, yet at the same time highly accessible to a general reader. . . . This book is a tremendous achievement and deserves a treasured place on the bookshelf of anyone who hearkens to the call of Pan.”
— Enfolding.org

"This is simply the most wide-ranging and up-to-date exploration of the impact of Pan on the Western imagination yet written."
— Ronald Hutton, author of "The Triumph of the Moon"

"We get the pleasure of seeing this goat-like god pop up everywhere from classic children’s literature to romantic novels to early environmentalist tracts. . . . The result is a tour de force."
— Pericles Lewis, author of "The Cambridge Introduction to Modernism"