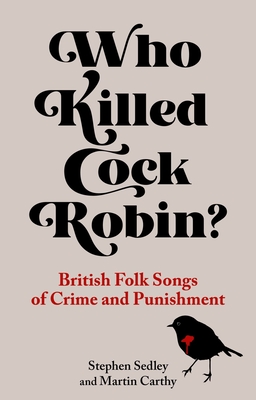 By Stephen Sedley, Martin Carthy
$22.50
Email or call for price.

An entertaining and enlightening compendium at the intersection of two great British folk traditions: song and encounters with the law.

At the heart of traditional songs rest the concerns of ordinary people. And folk throughout the centuries have found themselves entangled with the law: abiding by it, breaking it, and being caught and punished by it. Who Killed Cock Robin? is an anthology of just such songs compiled by one of Britain’s most senior judges, Stephen Sedley, and best-loved folk singers, Martin Carthy. The songs collected here are drawn from manuscripts, broadsides, and oral tradition. They are grouped according to the various categories of crime and punishment, from Poaching to the Gallows. Each section contains a historical introduction, and every song is presented with a melody, lyrics, and an illuminating commentary that explores its origins and sources. Together, they present unique, sometimes comic, often tragic, and always colorful insight into the past, while preserving an important body of song for future generations.

Martin Carthy MBE is a singer and guitarist and one of Britain’s most highly regarded folk musicians. In 2014 he received the Lifetime Achievement Award at the BBC Radio 2 Folk Awards.

"At the heart of the folk songs which have found a new popularity of late, rest the concerns of ordinary people who have found themselves entangled with the law. . . . They are grouped according to various categories of crime and punishment, from Poaching to The Gallows; and accompanied by illuminating commentaries."
— The Bookseller

“At last, a simple, reader-friendly book on the cause-effect relationship between the CRIMES of the UPPER classes (documented in court and prison records, history books, the lives lost via law, scaffolds, transportation, et al.) and the ‘crimes’ of the ‘lower’ classes (as documented in folk songs and ballads). The savagery of our toxic system of governance, the endless, pitiless theft of the property and rights of the public are kept in the public memory in the only unassailable form: the oral tradition. A trustworthy, authoritative, edifying. and highly enjoyable read. Put it into school curricula.”
— Peggy Seeger, folk singer, musician, songwriter, activist, and author of "First Time Ever"

“A rich and rewarding journey through the law—and lore—of song and balladry. With such outstanding authors/compilers it’s no surprise whatsoever but their understanding, respect, and regard for their source material mean that expertise and scholarship never swamp but only enhance and enlighten the reading experience. As well as opening my eyes to some previously unknown examples of legal chicanery or barely believable repressive legislation and practice, every page made me want to sing these songs and ballads of the wronged and the ruthless, the cruel and cunning and the good, the bad—and the lovely. What a great delight of a book.”
— Willy Russell, author of "Educating Rita" and "Blood Brothers"