Etidorhpa or the End of Earth: The Strange History of a Mysterious Being (Paperback) 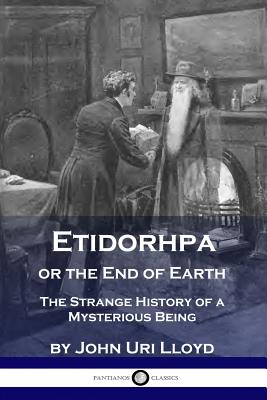 By John Uri Lloyd
Email or call for price

Etidorhpa is an early science fiction novel depicting a man's descent into the bowels of the Earth at the instigation of a mysterious secret society - it is presented here complete with the original illustrations.

Llewyllyn Drury is visited by a mysterious old man whose defining physical feature is his large, protruding forehead. The man offers to tell his story, promising that his life and knowledge is worth writing down. Being as the man displays certain enthralling and supernatural powers, Drury assents to the task - Etidorhpa is this story, interspersed with pauses wherein Drury questions his strange houseguest.

John Uri Lloyd was a popular author of mystery and science fiction books. His profession however was pharmacology, with his specialism being herbal medicines and ethnobotanicals. The presence of giant mushrooms in one portion of the story, plus the various fantastical elements described, have led some readers to speculate that the author's knowledge of mind-altering substances influenced Etidorhpa's plotting.

Some sixty-five illustrations populate the pages of this book. They depict the stages of the journey, plus some of the scientific and metaphysical concepts explored.