Sorted: Growing Up, Coming Out, and Finding My Place; A Transgender Memoir (Compact Disc) 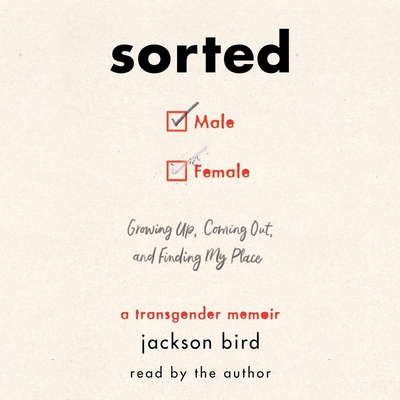 By Jackson Bird (Read by)
$39.99
Possibly out of print. Email or call to check availability and price.

An unflinching and endearing memoir from LGBTQ+ advocate Jackson Bird about how, through a childhood of gender mishaps and an awkward adolescence, he finally sorted things out and came out as a transgender man in his mid-twenties. When Jackson Bird was twenty-five, he came out as transgender to his friends, family, and anyone in the world with an Internet connection. Assigned female at birth and having been raised a girl, he often wondered if he should have been born a boy. Jackson didn't share this thought with anyone because he didn't think he could share it with anyone. Growing up in Texas in the 1990s, he had no transgender role models. He barely remembers meeting anyone who was openly gay, let alone being taught that transgender people existed outside of punchlines. Today, Jackson is a writer, YouTuber, and LGBTQ+ advocate living openly and happily as a transgender man. So how did he get here? In this remarkable, educational, and uplifting memoir, Jackson chronicles the ups and downs of growing up gender confused. Illuminated by journal entries spanning childhood to adolescence to today, he candidly recalls the challenges he faced while trying to sort out his gender and sexuality, and worrying about how to interact with the world. With warmth and wit, Jackson also recounts how he navigated the many obstacles and quirks of his transition--like figuring out how to have a chest binder delivered to his NYU dorm room and having an emotional breakdown at a Harry Potter fan convention. From his first shot of testosterone to his eventual top surgery, Jackson lets you in on every part of his journey--taking the time to explain trans terminology and little-known facts about gender and identity along the way. Through his captivating prose, Bird not only sheds light on the many facets of a transgender life, but also demonstrates the power and beauty in being yourself, even when you're not sure who "yourself" is. Part memoir, part educational guide, Sorted is a frank, humorous narrative of growing up with some unintended baggage.