The Marathon Don't Stop: The Life and Times of Nipsey Hussle (Compact Disc) 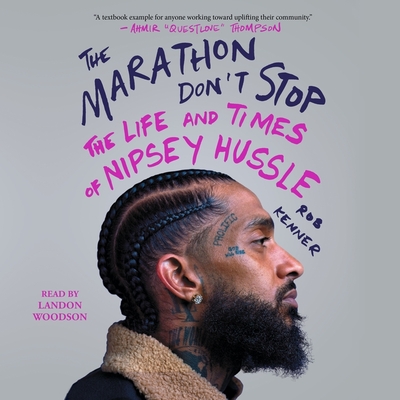 By Rob Kenner, Landon Woodson (Read by)
$39.99
Possibly out of print. Email or call to check availability and price.

The first in-depth biography of Nipsey Hussle, the hip hop mogul, artist, and activist whose transformative legacy inspired a generation with his motivational lyrics and visionary business savvy--before he was tragically shot down in the very neighborhood he was dedicated to building up.In the ten years since he first met Nipsey Hussle in the offices of Vibe, journalist Rob Kenner followed Hussle's career, paying close attention to the music and business movement he was building in Los Angeles. Ten years later, they spoke again. To Kenner, it became clear that Hussle had been underestimated his entire life--not just for his artistry but also for his intellect and intentions. For Nipsey Hussle, "The Marathon" was more than a mixtape title or the name of a clothing store; it was a way of life, a metaphor for the relentless pursuit of excellence and the willpower required to overcome adversity day after day. Hussle was determined to win the race to success on his own terms, and he wanted to see his whole community in the winner's circle with him. Combining on-the-ground reporting and candid interviews with Hussle's friends, family, and peers, The Marathon Don't Stop traces the life and work of an extraordinary artist, placing him in historical context and unpacking his complex legacy. For the first time ever, members of his inner circle will speak about the man they knew and his determination to maintain integrity amidst the treacherous extremes of street life and the rap game. The Marathon Don't Stop is a journalistic account of Nipsey Hussle's life and times, making sense of the forces that shaped a singular figure in hip hop culture.