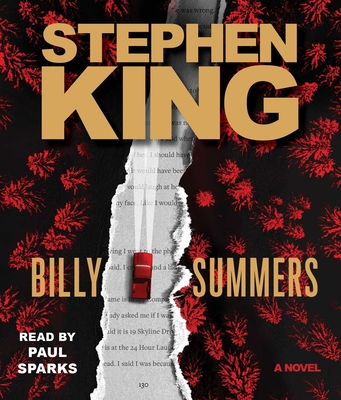 From legendary storyteller Stephen King, whose “restless imagination is a power that cannot be contained” (The New York Times Book Review), comes a thrilling new novel about a good guy in a bad job.

Billy Summers is a man in a room with a gun. He’s a killer for hire and the best in the business. But he’ll do the job only if the target is a truly bad guy. And now Billy wants out. But first there is one last hit. Billy is among the best snipers in the world, a decorated Iraq war vet, a Houdini when it comes to vanishing after the job is done. So what could possibly go wrong?

This spectacular can’t-put-it-down novel is part war story, part love letter to small town America and the people who live there, and it features one of the most compelling and surprising duos in King fiction, who set out to avenge the crimes of an extraordinarily evil man. It’s about love, luck, fate, and a complex hero with one last shot at redemption.

You won’t put this story down, and you won’t forget Billy.

Stephen King is the author of more than sixty books, all of them worldwide bestsellers. His recent work includes Billy Summers, If It Bleeds, The Institute, Elevation, The Outsider, Sleeping Beauties (cowritten with his son Owen King), and the Bill Hodges trilogy: End of Watch, Finders Keepers, and Mr. Mercedes (an Edgar Award winner for Best Novel and a television series streaming on Peacock). His novel 11/22/63 was named a top ten book of 2011 by The New York Times Book Review and won the Los Angeles Times Book Prize for Mystery/Thriller. His epic works The Dark Tower, It, Pet Sematary, and Doctor Sleep are the basis for major motion pictures, with It now the highest-grossing horror film of all time. He is the recipient of the 2020 Audio Publishers Association Lifetime Achievement Award, the 2018 PEN America Literary Service Award, the 2014 National Medal of Arts, and the 2003 National Book Foundation Medal for Distinguished Contribution to American Letters. He lives in Bangor, Maine, with his wife, novelist Tabitha King.

"Narrator Paul Sparks's performance is so perfect it challenges the listener to stop listening. Sure—just TRY to turn it off! Sparks is fantastic, whether he's giving voice to a fat Mafioso called Pig or a young rape victim who turns to Billy for help or the other colorful characters from King's work. While Billy's character is a tad far-fetched, it fits the definition of antihero—think Showtime's Dexter. And because the story is told in the first person, listeners see the decent person inside the man with blood on his hands."
— Winner of an AudioFile Earphones Award, AudioFile Magazine