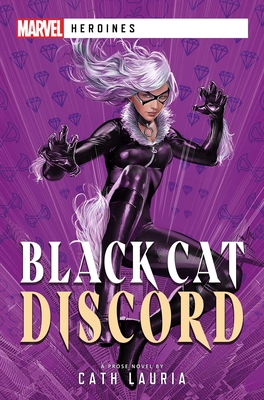 Felicia Hardy always puts her own interests first, but the appearance of a mythical golden apple in New York has everybody with a hint of power scrambling for it. And who’s everyone’s number one choice to nab it for them? The Black Cat, of course. Yet that isn’t the only job on Felicia’s radar. When a smart-aleck kid turns up demanding her help, Felicia finds herself caught between the mob, her morals and some very insistent supervillains. It’ll take all nine lives to wriggle out of this one intact, but Felicia has more than one trick up her sleeve.

CATH LAURIA is a Colorado girl who loves snow and sunshine. She is a prolific author of science fiction, fantasy, suspense and romance fiction, and has a vast collection of beautiful edged weapons.

"Black Cat finds herself in the middle of not one but two interesting developments, and I enjoyed how the author was able to weave them together into an engaging narrative that has lots of action and heart. "
— Martin’s View, on Marvel Heroines: Black Cat: Discord

"In short this novel ticked nearly all my boxes, a strong arguably morally grey female lead who is sassy and can look after herself, brilliant bickering and banter between Felicia and her henchmen (although really they are more like family!), a young protégée who has her own tricks up her sleeve, fund and reunited family, epic team ups and fights and representation done in a natural way."
— What You Tolkien About, on Marvel Heroines: Black Cat: Discord

"I think that it might be one of the best books that Aconyte and Marvel have done together. The book was filled with great character moments, exciting actions, and wonderfully delightful scenes that could only ever work for Black Cat. An absolute pleasure to read from start to finish."
— Trans-Scribe, on Marvel Heroines: Black Cat: Discord

"I gave Black Cat: Discord five stars. I enjoyed Black Cat’s character voice, the interactions among her team members, and multiple interactions with other heroes such as Iron Fist, Spider-Man, the Daredevil, and IronMan/Tony Stark. It’s a fun look at a character who walks the fine line between being a hero and being an anti-hero."
— Chris L. Owens, on Marvel Heroines: Black Cat: Discord