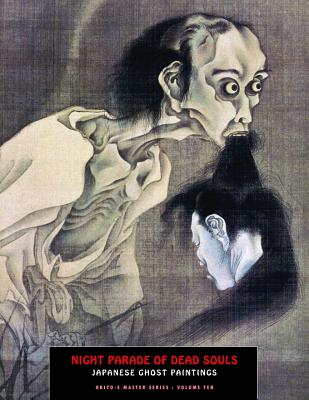 This is book number 10 in the Ukiyo-E Master series.

The female ghost or yurei (literally, faded spirit) is perhaps the most recognizable figure in Japanese horror culture, powerfully reinforced through the success of Japanese ghost films such as Ringu (The Ring) and Ju-On (The Grudge). Their traditional appearance -- long black hair in disarray over the face, white skin and white burial clothing -- goes back to the very first painted scroll images of such creatures, of which the prototype is said to be Maruyama Okyo's painting of the ghost of the geisha Oyuki, from 1750.

Night Parade Of Dead Souls, the first book of its kind to be published in English, collects 70 of the most striking and disturbing Japanese ghost images from classic art, and offers an essential glimpse into the twilight strata of Japanese art, popular myth, and religious belief. The artists featured range from obscure painters to the venerated ukiyo-e artist Tsukioka Yoshitoshi, who created numerous ghost paintings around 1880. All the paintings, which range in date from 1750 to the early 20th century, are shown at full-page length, and in full colour throughout.

The Ukiyo-e Master Series: presenting seminal collections of art by the greatest print-designers and painters of Edo-period and Meiji-period Japan.