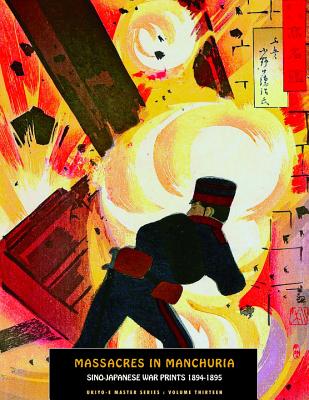 By Jack Hunter (Editor)
$34.95
Possibly out of print. Email or call to check availability and price.

This is book number 13 in the Ukiyo-E Master series.

The first Sino-Japanese War of 1894-1895 was Japan's first modern war, and their first military action overseas for over 300 years. One notable result of this conflict was a huge burst in popularity for senso-e (war pictures), a genre of ukiyo-e which first evolved as a mutation of musha-e (warrior pictures) with the need in the 1870s to document the contemporary conflicts which had raged in Japan as a result of the Meiji Restoration, in particular the Seinan War of 1877.

Dozens of artists, from the celebrated to the obscure, added to the mass of images which circulated as the Sino-Japanese War progressed (an estimated 3,000 prints were created in just 10 months). Most of the scenes depicted were based on news reports sent back from the front, with artists rushing to replicate events as quickly as possible. The triptych, with its almost cinematic visual scope, was the preferred format for depicting such scenes of turmoil and carnage. Whilst there is a huge range in quality between the prints made by various artists, the very best senso-e of the Sino-Japnese War remain amongst the finest in ukiyo-e, providing a bold, if brief, resurrection for an artform which was in danger of dying out due to the advent of new imaging technologies.

MASSACRESe INe MANCHURIA features over 200 rare and exceptional Japanese woodblock prints of war. The artists featured in the book include Kiyochika, Gekko, Toshihide, Toshikata, Nobukazu, Chikanobu, Ginko, and numerous others -- a list of many of the most outstanding ukiyo-e artists of the late Meiji period, each of whom used their immense artistic talent and imagination to brilliantly illuminate contemporary conflict as it unfurled.