Our Enemies in Blue: Police and Power in America (Paperback) 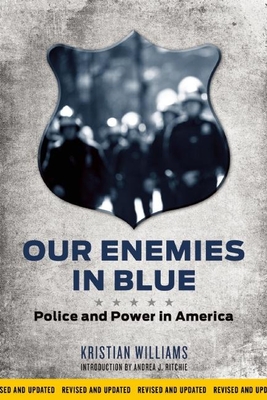 Let's begin with the basics: violence is an inherent part of policing. The police represent the most direct means by which the state imposes its will on the citizenry. They are armed, trained, and authorized to use force. Like the possibility of arrest, the threat of violence is implicit in every police encounter. Violence, as well as the law, is what they represent.

Using media reports alone, the Cato Institute's last annual study listed nearly seven thousand victims of police misconduct in the United States. But such stories of police brutality only scratch the surface of a national epidemic. Every year, tens of thousands are framed, blackmailed, beaten, sexually assaulted, or killed by cops. Hundreds of millions of dollars are spent on civil judgments and settlements annually. Individual lives, families, and communities are destroyed.

In this extensively revised and updated edition of his seminal study of policing in the United States, Kristian Williams shows that police brutality isn't an anomaly, but is built into the very meaning of law enforcement in the United States. From antebellum slave patrols to today's unarmed youth being gunned down in the streets, peace keepers have always used force to shape behavior, repress dissent, and defend the powerful. Our Enemies in Blue is a well-researched page-turner that both makes historical sense of this legalized social pathology and maps out possible alternatives.

Kristian Williams is the author of several books, including American Methods: Torture and the Logic of Domination. He co-edited Life During Wartime: Resisting Counterinsurgency, and lives in Portland, Oregon.

Kristian Williams is the author of American Methods: Torture and the Logic of Domination, Hurt: Notes on Torture in a Modern Democracy, and Fire the Cops! He was one of the editors of the collection Life During Wartime: Resisting Counterinsurgency, and is a contributing editor at the movement security web journal, DCSC.ws. He has written about policing and state violence for Clamor, Counterpunch, New Politics, In These Times, and Toward Freedom. He lives in Portland, Oregon.