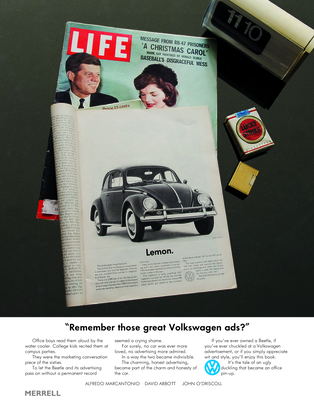 The revolutionary Volkswagen advertising campaign of the 1960s and 70s is universally acknowledged to be the greatest and most influential ever created and was acclaimed as "the campaign of the century" in the Millennium editions of Time Magazine and the US ad industry bible Advertising Age. Remember those great Volkswagen ads? is the only comprehensive review of this definitive ad campaign. It features a brief history of the iconic Volkswagen Beetle, followed by an account of the birth of the campaign at US ad agency Doyle Dane Bernbach (DDB). This much enlarged and updated edition is illustrated with over 450 reproductions of press advertisements and TV commercial storyboards primarily featuring the VW Beetle, but also the Van, Bus and Camper, the Karmann Ghia and finally the VW Fastback and Squareback vehicles. Also included is a new section devoted to the billboards created by DDB in Los Angeles, as well as some of the ads created by their offices in Europe.

ALFREDO MARCANTONIO was Advertising Manager of Volkswagen GB during the early seventies. Inspired by DDB's work on the account, he left to be a copywriter in 1974 and has since worked on many of Britain's most popular advertising campaigns, including Hamlet Cigars, Heineken, BMW, BT and Carling Black Label. He is currently a partner in the London-based creative consultancy Holmes, Hobbs, Marcantonio (HHM). DAVID ABBOTT is one of the most respected figures in World advertising. A successful young copywriter at DDB in London, he earned a stint with Bill Bernbach in New York before returning to become Creative Director of the Agency's London office. David went on to found French Gold Abbott and later Abbott Mead Vickers. Now re-named AMV BBDO, it is regarded as one of the most creative agencies in the world. In 2001 he was inducted into the highly prestigious US Creative Hall of Fame. JOHN O'DRISCOLL joined DDB as an art director in 1967 where, together with his writer Dave Brown, he created several of the British Volkswagen ads that appear in this book. John went on to work at some of London's top creative advertising agencies before becoming a successful Director at the Paul Weiland Film Company.