My March With César (Paperback) 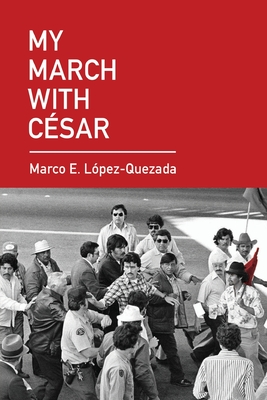 Marco E. L pez Quezada's compelling memoir takes us on a journey between many points in his life. We get a broader sense of the connections and movement between the United States' southwest and northern and central Mexico when people of conscience were fully waking up and formulating strategies to stand up to racial inequality and repression. The country had gone through a significant world war followed close behind by another conflict in the Pacific. At the same time, here at home, our country was gearing up for a substantial struggle around racial inequities and social injustice. This book looks into the life and formation of a Mexican-American boy who grows into a man during these unsettling but exciting times in our country's history.

What makes this book an excellent read is a sharp juxtaposition between the old and the new. A world on a collision course between large numbers of people wanting change and those - who benefit from the way things are - wanting to keep it the same. L pez Quezada is born into a family steeped in the traditional values of hard work, commitment, and strong religious beliefs - who has held those values near and dear - and at the same time lives in a non-traditional configuration. While being raised in a traditional Catholic home, which included a strict catholic education, L pez Quezada, was raised by a single parent, which was considered unconventional. His mother, a brilliant and savvy businesswoman, also starts her own wildly successful business. A Mexican-American woman running her own business was also virtually unheard of at the time. This strong independent mother demanded from her children what she demanded from herself, hard work, dignity, being well-educated, and being involved members of the community.

When the world was changing at breakneck speed, when a person could choose to go down so many distinct paths, L pez Quezada chose one that was both traditional and incorporated his family's values but was not easy. This decision put him front and center in a world that was demanding more than the status quo. One that said, Ya Basta Or, enough is enough, with the injustices and inequalities. This choice would bring him into peril and conflicts and link him to one of the most charismatic civil rights leaders of our modern historical times.

In the writing of these intimate vignettes of L pez Quezada's life, we learn what leads and ultimately motivates him to take up La Causa - the cause - for the fair and just treatment self-determination of farmworkers, which changes his life forever. Even though the choices he made in life were ultimately the best ones for the man he became, they came at a cost.

This book gives us a very personal look into the relationships between people locked in and dedicated to the struggle for what is right. At the same time, we see contradictions that arise out of an unfair system, what is considered "normal" in the world of work, and how work is valued and rewarded.

L pez Quezada's memoir is a coming-of-age story that is more global in its scope and ultimate message. It is a book that gives us hope despite the pitfalls of us being complex human beings, having to grapple with our upbringings and internal conflicts, and the outside world in which we find ourselves interacting.

This is a book worth reading.