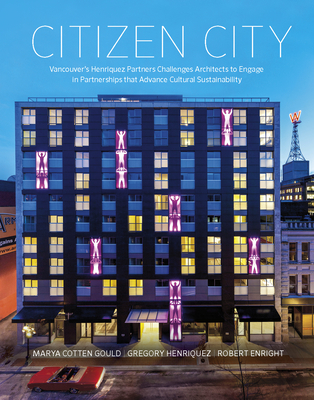 Citizen City focuses on the latent potential of cross-sector partnerships among private developers, non-profits and various levels of government in attempting to harness a portion of the wealth created in the real estate development process to achieve socially valuable urban planning goals: meeting the needs of the community's most vulnerable members, providing affordable housing and creating community amenities to promote a vibrant urban culture. The book highlights the success and failures of such partnerships with case studies of ten Vancouver, BC, building projects. The projects combine the strengths of Henriquez Partners Architects and Collaborators from all sectors, and are in varying stages of development from concept to completion. It is hoped that the lessons of these cross-sector partnerships will aid the creation of a more vibrant, just, community-oriented city--a Citizen City--and continue to improve Vancouver. Additionally, these important projects may help guide other North American cities towards a more just existence. Citizen City will also touch on the role of the design community as thought leaders and relationship builders, and contains a provocative interview with Gregory Henriquez challenging a new generation of architects towards greater civic engagement.

Marya Cotten Gould is an author and lawyer. Prior to relocating to Vancouver, BC, Canada, Marya was a full-time law professor at Baruch College of The City University of New York, where she was the recipient of a Zicklin School of Business Teaching Excellence Award. Marya's research centered on her belief that ethical, sustainable and creative business can generate positive social and environmental change. She has published articles about the legal and business challenges of social enterprise, the power of cross-sector partnerships between corporations and non-profit organizations, and green building policy. Marya has worked as a VP for Acquisitions at the Hudson Yards Development Corporation, a non-profit set up by the Bloomberg administration to implement and manage a multi-billion dollar economic and real estate development project on the far west side of Manhattan. As a mayoral appointee, Marya previously served on the board of directors for the New York City Industrial Development Agency, which provides companies with financing and tax benefits to attract and retain diverse businesses and jobs. She also has eight years of experience as a real estate and corporate attorney, most recently at Weil, Gotshal & Manges LLP in New York City. Marya received her juris doctorate from the University of Chicago and an undergraduate degree in Politics/Public Policy Analysis from Pomona College. She is a member of the bar in New York and Washington, as well as a LEED accredited professional. Gregory Henriquez is the Managing Partner of Henriquez Partners Architects in Vancouver, BC, Canada, and a leader among a new generation of architects who are reintegrating ethics and activism into the discipline. His work is founded on the belief that meaningful architecture must be a poetic expression of social justice. Gregory's socially, culturally, and environmentally sustainable projects are having a major impact on shaping local communities. He recently completed the socially inclusive Woodward's Redevelopment in Vancouver's Downtown Eastside - a project that is bringing new density and vital body heat to the area. The project is unprecedented in Canada due to its scale, humanitarian aspirations, and complexity. It was awarded a 2011 AIBC Special Jury Award for Outstanding Programming and Place-making, and the National Design Exchange Gold Medal. Currently, Gregory is the Design Architect for TELUS Garden, which will bring Vancouver its first LEED Platinum-certified office tower. Gregory's work has been honoured with numerous design awards, including BC Lieutenant Governor's Medals in Architecture for the Coal Harbour Community Centre and Bruce Eriksen Place, and a Governor General's Medal in Architecture for the Lore Krill Housing Co-op. He is a member of the Royal Canadian Academy of Arts and a Fellow of the Royal Architectural Institute of Canada. Robert Enright is one of Canada's best known cultural journalists. He is the founder and Senior Contributing Editor of Border Crossings magazine and holds a research chair in Art Criticism at the University of Guelph. He was an art critic for CBC radio and television for twenty-five years and continues to contribute to a number of network programs. He also contributes regularly to the Globe and Mail, and to a number of international art magazines. For his work he has received fourteen nominations at the National and Western Magazine Awards. In 2005 he was named a Member of the Order of Canada, and in 2012 he was awarded the Queen Elizabeth II Diamond Jubilee Medal.