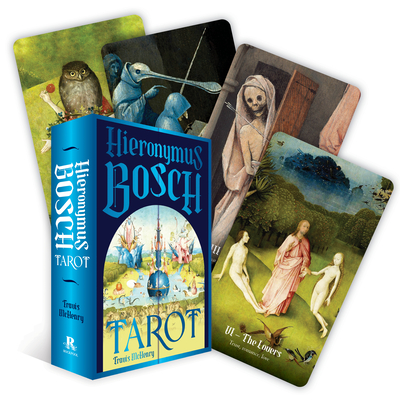 A deck of daydreams and nightmares!  This deck presents the 78 cards of the tarot as seen through the mind of 15th-century Dutch painter, Hieronymus Bosch.

There are few artists whose work has sustained its power to shock, amaze, and delight audiences for over 500 years, but anyone who views The Garden of Earthly Delights will surely experience all three of those emotions at once. Although Hieronymus Bosch has a reputation as a brilliant madman, in his time he was regarded as a master of art. His unique dreamlike style led him to be crowned the first surrealist in a period where the artistic consensus was one of realism.

The result is a deck that is beautiful, inspirational, and unlike anything you've ever seen before.

Sometimes humorous, sometimes haunting, but always captivating, The Hieronymus Bosch Tarot will be treasured both as a divination tool and as an occult work of art.  A special feature of this deck is the top box which features two open-out panels with magnetic closure that reveal The Garden of Earthly Delights full image.

Travis McHenry is widely known as one of the foremost occultists of the modern era. As an author, he has written books on the history of the tarot and a memoir about his ten-year research study into paranormal phenomena. A native of rural Pennsylvania, Travis grew up surrounded by the folklore of the Appalachian Mountains and this shaped his desire to uncover and share historical truths hidden behind mythological stories. His most recent works are Occult Tarot, Angel Tarot, and Vlad Dracula Tarot.