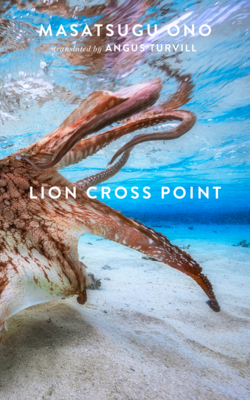 An amazingly gentle depiction of the life of a young boy in a sleepy coastal town in Japan. Page by lovely page the book sifts through the inchoate and shifting memories of the boy and the brutality he suffered (along with his mother and older brother) when they lived in the city, and it takes in his impressions of the new family—the community—that is forming around him and coming to his aid now that he is separated from them. With the help of a supernatural dolphin, maybe, and maybe these people, he’ll be able to get through and go on. Ono’s voice is so steady, so soft, so attuned, that he brings out barely registrable frequencies and rarely registered voices. A quiet stunner.

By the winner of the Akutagawa Prize, Japan's most prestigious literary award How does a shy, traumatized boy overcome the shame, anger, and sadness that silence him? In Lion Cross Point, celebrated Japanese author Masatsugu Ono turns his gentle pen to the mind of ten-year-old Takeru, who arrives at his family's home village amid a scorching summer, carrying memories of unspeakable acts against his mother and brother. As Takeru befriends Mitsuko, his new caretaker, and Saki, his spunky neighbor, he meets more of his mother's old friends, discovering her history and inching toward a new idea of family and home. All the while he begins to see a strange figure called Bunji--the same name as a delicate young boy who mysteriously vanished long ago on the village's breathtaking coastline at Lion Cross Point. At once a subtle portrayal of a child's sense of memory and community, an empowering exploration of how we find the words to encompass our trauma, and a spooky Japanese ghost story, Lion Cross Point is gripping and poignant, reminiscent of Kenzaburō Ōe's best work. Acts of heartless brutality mix with surprising moments of pure kindness, creating this utterly truthful, cathartic tale of an unforgettable young boy.

Masatsugu Ono is one of Japan's most lauded contemporary authors. His novel Mizu ni umoreru haka (The Water-Covered Grave) won the Asahi Award for New Writers, and Nigiyakana wan ni seowareta fune (Boat on a Choppy Bay) won the Mishima Prize. He also received the Akutagawa Prize, Japan's highest literary honor, in 2015. He lives in Tokyo. Angus Turvill's translations include Tales from a Mountain Cave, by the great humorist and anti-militarist Hisashi Inoue, Heaven's Wind, a bilingual collection of stories by some of Japan's finest contemporary women writers, and The Art of Discarding by Japan's original decluttering guru Nagisa Tatsumi. He has won the Grand Prize in the Shizuoka International Translation Competition, and has received John Dryden and Kurodahan translation awards. An instructor of Japanese translation, he lives in Norfolk, U.K.