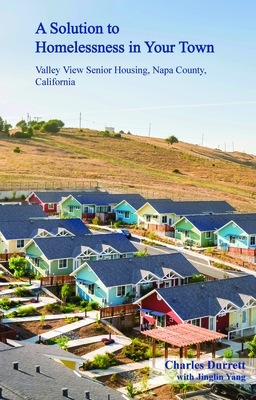 Homelessness is one of the monsters that haunts our society. Thousands of people are trying to address the challenge but fail to come up with a solution. Valley View Senior Housing, built in 2019 in Napa County, CA, is a VERY affordable community of 70 cottages. This groundbreaking homeless project was organized by American Canyon's city government, for older homeless people and homeless veterans of the area. This solution-oriented book shares the inspiring story of a compassionate & humane project. Imagine if every city could do one community like this and we can begin to make headway to solve the homeless problem. Every city can do this And from this we can grow to do even more. Durrett and his team at The Cohousing Company have designed more than 50 cohousing communities in the United States and around the world, including Muir Commons in Davis, California, the first cohousing community in North America. His work has been featured in Time Magazine, The New York Times, The Los Angeles Times, The San Francisco Chronicle, The Guardian, Architecture, The Wall Street Journal, The Economist, and many other publications. Charles Durrett has received numerous awards, which include the World Habitat Award presented by the United Nations, the Silver Achievement Award for Active Adult Community by the National Association of Home Builders (NAHB) 50+ Housing Council, the Silver Energy Value Housing Award by NAHB, the Mixed Use/Mixed Income Development Award presented jointly by the American Institute of Architects and the United States Department of Housing and Urban Development and a recipient of the Global Over 50's Housing/Healthcare award. He was also recently declared as a "visionary of the Sierras" by the Sierra Business Council, and the International Property Awards.