Behind the Kaiju Curtain: A Journey Onto Japan's Biggest Film Sets (Paperback) 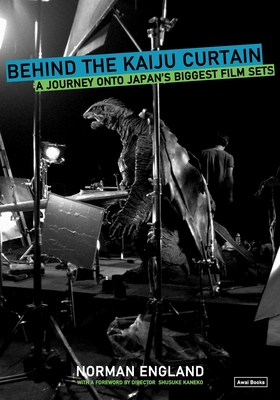 ーEd Godziszewski, author of Ishiro Honda: A Life in Film, from Godzilla to Kurosawa

Norman England's gutsy and insightful stories will do more than just entertain. This is the first and only book in English to take you on a deep dive into the Japanese film industry. You will join well-known directors, cast, and staff for tales of backroom set dealings. The author's own unlikely story starts with joining the Japanese crew on a George Romero-directed TV commercial shot in Los Angeles. Afterward, in Tokyo, Norman England learns to navigate the sets of giant monster icons Gamera and Godzilla. The book concludes with the premiere of Godzilla, Mothra and King Ghidorah: Giant Monsters All-Out Attack. This diary from the front lines is essential reading for Japanese cinema enthusiasts and filmmakers everywhere.

Norman England moved from New York City to Tokyo in 1992. He works in the Japanese film industry as a movie subtitler, still photographer, and director. The Japan Times has described him as "the world's leading non-Japanese expert on all things Godzilla." England reports on Japanese cinema for a variety of film magazines, including Fangoria, Starlog, Hobby Japan, and Eiga Hiho.