Ear to the Ground (Paperback) 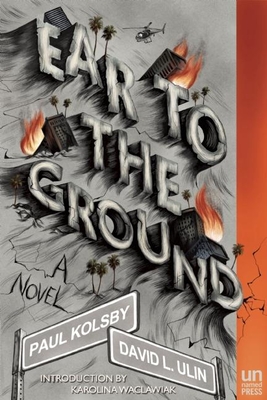 Seismologist Charlie Richter, grandson of the inventor of the Richter scale, knows earthquakes, and has a method for predicting them. Arriving in Los Angeles to begin work at the Center for Earthquake Studies, a mysterious agency that seems more Hollywood than science, Charlie settles into his new life. His only distraction from work is Grace, an assistant to a powerful producer, and her deadbeat scriptwriter boyfriend Ian. It's only a matter of time before Charlie sees the Big One looming on the horizon. When Charlie alerts his boss at the Center, he is the one that's in for a shock: this is exactly what the Center was hoping for. With the news leaked, everyone's suddenly looking to produce the next disaster blockbuster. One of the few scripts Ian actually wrote, Ear to the Ground, happens to be about an earthquake disaster, and soon it's plucked from obscurity and given the fast track. But with a little bit of luck, Charlie may just foil everybody's plans. He just needs explosives, a helicopter, a little more time. By award-winning writer and Los Angeles Times book critic David Ulin, Ear to the Ground is a rollicking visit back to the 1990s.

David L. Ulin is the former book critic of the Los Angeles Times. A 2015 Guggenheim Fellow, he is the author or editor of nine books, including Sidewalking: Coming to Terms with Los Angeles, the novella Labyrinth, The Lost Art of Reading: Why Books Matter in a Distracted Time, and the Library of America's Writing Los Angeles: A Literary Anthology, which won a California Book Award. He lives in Los Angeles. Paul Kolsbyhas written for The Los Angeles Times, Details, Bikini, and the former Los Angeles Reader--where Ear to the Ground was first published serially. He wrote the films "City Unplugged" and "Spread" and works currently on the television series "Masters of Sex." Formerly on the faculties at U.C.L.A. and N.Y.U., he lives in Los Angeles with his wife and two children.