In Full Color: Finding My Place in a Black and White World (Hardcover) 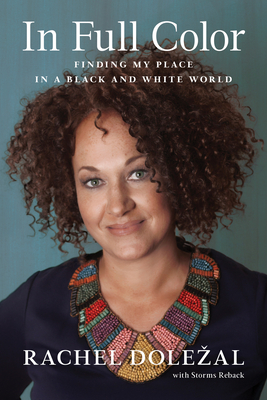 By Rachel Dolezal, Storms Reback
$24.95
Possibly out of print. Email or call to check availability and price.

A lot of people have made up their minds about Rachel Doležal. But none of them know her real story.

In June 2015, the media "outed" Rachel Doležal as a white woman who had knowingly been "passing" as Black. When asked if she were African American during an interview about the hate crimes directed at her and her family, she hesitated before ending the interview and walking away. Some interpreted her reluctance to respond and hasty departure as dishonesty, while others assumed she lacked a reasonable explanation for the almost unprecedented way she identified herself.

What determines your race? Is it your DNA? The community in which you were raised? The way others see you or the way you see yourself?

With In Full Color, Rachel Doležal describes the path that led her from being a child of white evangelical parents to an NAACP chapter president and respected educator and activist who identifies as Black. Along the way, she recounts the deep emotional bond she formed with her four adopted Black siblings, the sense of belonging she felt while living in Black communities in Jackson, Mississippi, and Washington, DC, and the experiences that have shaped her along the way.

Her story is nuanced and complex, and in the process of telling it, she forces us to consider race in an entirely new light—not as a biological imperative, but as a function of the experiences we have, the culture we embrace, and, ultimately, the identity we choose.

Rachel Doležal holds an MFA from Howard University. Her scholarly research focus is the intersection of race, gender, and class in the contemporary Black diaspora, with a specific emphasis on Black women in visual culture. She is a licensed Intercultural Competency & Diversity Trainer, dedicated to racial and social justice activism. She has worked as an instructor at North Idaho College and Eastern Washington University, where she also served as Advisor for the schools' Black Student Unions, as well as Whitworth University, and has guest lectured at Spokane Community College, University of Idaho, Gonzaga University, and Washington State University.

Doležal began her activism in Mississippi, where she advocated for equal rights and partnered with community developers, tutoring grade-school children in Black history and art and pioneering African American history courses at a predominantly white university. She is the former Director of Education at the Human Rights Education Institute in Idaho and has served as a consultant for human rights education and inclusivity in regional public schools. She recently led the Office of Police Ombudsman Commission to promote police accountability and justice in law enforcement in Spokane, Washington, and was the President of the Spokane Chapter of the NAACP. She is the devoted mother of three sons.

Storms Reback is the author of three books All In: The (Almost) Entirely True History of the World Series of Poker, Farha on Omaha: Expert Strategy for Beating Cash Games and Tournaments, and Ship It Holla Ballas!: How a Bunch of 19-Year-Old College Dropouts Used the Internet to Become Poker's Loudest, Craziest, and Richest Crew. He lives in Austin, Texas with his wife and children.

"Finally, Rachel Doležal in her own voice and words shares her intriguing account and path of conscious self-definition, embodied in a life of activism. . . . Rachel forces us all to question what we have come to accept until now."
—Bishop Clyde N.S. Ramalaine, author of Preach a Storm, Live a Tornado

"Rachel Dolezal's early life memoir is not simply a narrative of radical activism. . . . It serves to critique the cultural straightjacket of traditionalist white ‘Protestant work ethic' society. At this moment of alt-right reactionism, it punctures the fake nostalgia for an imagined pre-multiculturalism era of supposed purity and authenticity."
—Gavin Lewis, Black British writer and academic

"The storm of vitriol Rachel received in the national spotlight was as cruel as it was undeserved. Her deep compassion for others shines through every chapter of her life and has clearly motivated her truly outstanding advocacy work."

"It's absolutely necessary to know the whole story in order to understand the extraordinary racial journey that Rachel Doležal has made."

—Ann Morning, associate professor of sociology at New York University and author of The Nature of Race: How Scientists Think and Teach about Human Difference