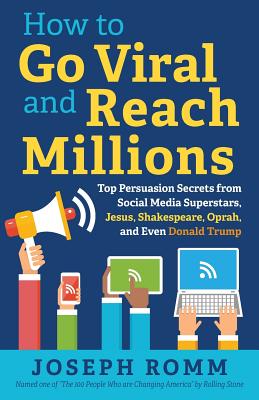 Learn the simple trick to telling viral stories used by Hollywood's best screenwriters and viral superstars like Oprah. And that's just in Chapter Two, which Emmy-nominated screenwriter Adam Gilad says is "worth the whole book."

"Romm has written an indispensable book for everyone who tweets, who posts online or who loves language." --Tom Friedman, columnist, NY Times

How To Go Viral And Reach Millions is the first book to reveal all the latest secrets for consistently generating viral online content-words, images, or videos that are seen and shared by hundreds of thousands and eventually even millions of people, something Romm and his colleagues in three different organizations achieve routinely.

"Joe Romm is the communicator's communicator. He has mastered the ancient rules of rhetoric and updated them for the digital age." --Van Jones, Host of CNN's, The Van Jones Show "Joe Romm understands the secret of making things go viral. Whatever your medium, this book will make a big difference."--Bill McKibben, author of The End of Nature Joseph Romm -- named one of Rolling Stone's "100 people who are changingAmerica" -- is one of the country's most influential progressive communicators.He is Chief Science Advisor for "Years of Living Dangerously," which won the 2014 Emmy Award for Outstanding Nonfiction Series and now generates viral videos online seen by tens of millions a month. Romm is founding editor of ClimateProgress.org, which NY Times columnist Tom Friedman called, "the indispensable blog." Romm is also a senior advisor for New Frontier Data, the leading "big data" firm providing actionable analysis in cannabis, whose content reaches hundreds of millions of people a year.