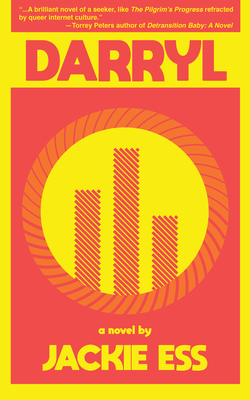 Whoa! Jackie Ess's DARRYL is phenomenally daring in its honesty. This is the first encounter I've had in contemporary fiction with ... uhh, cuckolding as it's actually practiced? Like the relatively new BDSM kind of cuckolding that's social media-accelerated and weirdly evolutionary-psychology-informed and stunningly sad but troublingly hot in its brutality -- these are not your eighteenth century love triangles -- a big open secret of modern society. So yes, this book is legitimately filthy, for want of a better word; ex: the opening page finds our narrator fantasizing about Lebron James's rings resting on the nightstand beside his wife's wedding ring while his enormous hands ... Well, you get it. But wait. As admirable as I believe it is for Jackie Ess to sabotage the silence around this subject among literary writers -- who might never have caught up to Redditors et al. without her example -- there's a lot more to DARRYL than the forthright fetish stuff. The latter half is differently inspired and unexpectedly moving. Altogether a startling and quite hilarious debut.

Darryl Cook is a man who seems to have everything: a quiet home in Western Oregon, a beautiful wife, and a lot of friends to fuck her while he watches. But as he explores the cuckolding lifestyle, he finds himself tugging at threads that threaten to unravel his marriage, his town, and himself.

"Underneath the sharp satire and hilarious sexual irreverence this is a deadly serious book: a brilliant novel of a seeker, like The Pilgrim's Progress refracted by queer internet culture."

Jackie Ess is a writer, cultural mischief-maker, and minor internet celebrity. A co-founder of the Bay Area Trans Writers Workshop, her work can be found in Heavy Feather Review, the Zahir, the New Inquiry, Vetch, and the anthology We Want It All: An Anthology of Radical Trans Poetics. Darryl is her first novel. Find her on Twitter @jackie_ess.