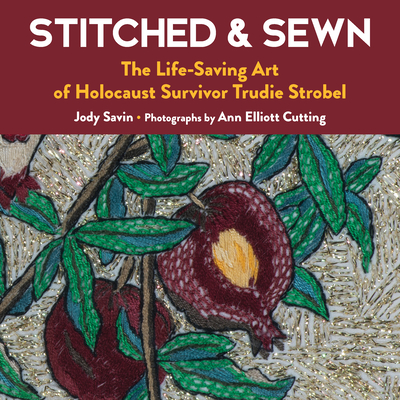 A child survivor of the Holocaust, Trudie Strobel settled in California, raising a family and never discussing the horrors she witnessed. After her children grew up, the trauma of her youth caught up with her, triggering a paralyzing depression. A therapist suggested that Trudie attempt to draw the memories that haunted her, and she did--but with needle and thread instead of a pencil. Resurrecting the Yemenite stitches of her ancestors, and using the skills taught by her mother, whose master seamstress talent saved their lives in the camps, Trudie began by stitching vast tableaus of her dark and personal memories of the Holocaust. What began as therapy exploded into works of breathtaking art, from narrative tapestries of Jewish history rendered in exacting detail to portraits of remarkable likeness, and many of her works are now in public and private collections. In Stitched & Sewn, Jody Savin tells the dramatic story of how a needle and thread saved Trudie Strobel's life twice, and Ann Elliott Cutting's photographs showcase Trudie's remarkable works of art. With a foreword by Michael Berenbaum, author of eighteen books, co-founder of the United States Holocaust Memorial Museum, and co-producer of the Academy Award-winning documentary One Survivor Remembers.

Jody Savin is a graduate of Princeton University and the American Film Institute, where she earned her MFA. Following college, she worked as a playwright and poet while supporting herself as musical director for such soap operas as The Guiding Light and As the World Turns, winning three Daytime Emmy nominations. Her poetry has been published in dozens of literary magazines. As a screenwriter, Savin wrote the award-winning TNT documentary Chico Mendes: Voice of the Amazon, and she wrote, produced, and distributed the independent films Bottle Shock, Nobel Son, and CBGB. She has also written and produced feature films for Disney, Universal, Columbia, and 20th Century Fox. She lives in Pasadena, California.