The Last President or 1900 (Paperback) 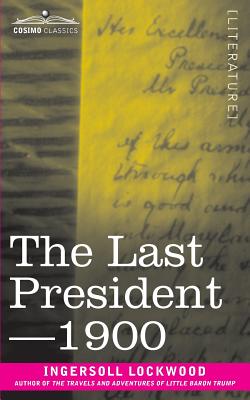 "...The entire East Side of New York City is in a state of uproar. Mobs of vast size are organizing under the lead of anarchists and socialists, and threaten to plunder and despoil the houses of the rich who have wronged and oppressed them for so many years." --From The Last President, 1896

1900, or The Last President, by INGERSOLL LOCKWOOD, is a surrealistic 1896 novel, where Americans are protesting a corrupt election process while the president's hometown of New York City is fearing the collapse of the republic after the transition of presidential power. If this reminds you of the attitudes after the 2016 Trump presidential win, you are not the alone. During 2017, this book, as well as Lockwood's two children's books, The Travels and Adventures of Little Baron Trump and His Wonderful Dog Bulger (1890) and Baron Trump's Marvellous Underground Journey (1893), drew attention due to its uncanny connections with President Trump and his family.

Does this book foresee Donald Trump as the last president of a republic as we know it? Is this a bizarre coincidence or prophetic? Let the reader decide.