The Invisible (The City-States Cycle) (Paperback) 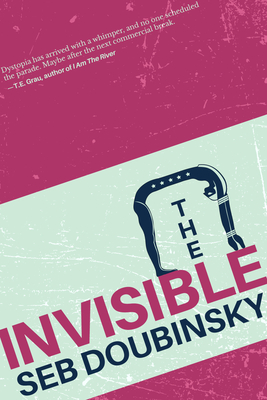 It’s election time in New Babylon, and President Maggie Delgado is running for re-election but is threatened by the charismatic populist Ted Rust. Newly appointed City Commissioner Georg Ratner is given the priority task to fight the recent invasion of Synth in the streets of the capital, a powerful hallucinogen drug with a mysterious origin. When his old colleague asks him for help on another case and gets murdered, things become more and more complicated, and his official neutrality becomes a burden in the political intrigue he his gradually sucked into. Supported by Laura, his trustful life partner and the Egyptian goddess Nut, Ratner decides to fight for what he believes in, no matter the cost.

Seb Doubinsky is a bilingual writer born in Paris in 1963. His novels, all set in a dystopian universe revolving around competing cities-states, have been published in the UK and in the USA. He currently lives with his family in Aarhus, Denmark, where he teaches at the university.

"While politicians on the right spew hate, those on the left are the puppets of insidious corporations, and together they uphold a system that murders artists and rebels. But an honest whiskey-sipping cop shines a light on that which might offer a small dose of redemption: Punk rock, trade unions, and slow-burning romantic love. Seb Doubinsky's The Invisible is a wry and tender novel, one that breathes fresh air into the tones of old-school noir, providing a balm for our absurd, terrifying times." —Hirsh Sawhney, author of South Haven

"The author’s well-paced story-telling drew me deep into the dystopian city-state of New Babylon, a world which, with its political corruption, power struggles, economic uncertainty and the threat from a powerful new drug felt all too recognisably topical!" —Linda Hepworth, NB Magazine

"In Seb Doubinsky’s dystopian novel The Invisible, politics are the only game in town … Brief, staccato chapters sparkle with surprising twists … Though Georg finally realizes that he’s just another bear in the circus, he is content with his role. In the stark novel, life is smothered by a mutually parasitic culture." —Foreword Reviews

“Beneath its neo-noir plot about mysterious murders during a fraught presidential election, this sly and subversive page-turner offers radical ideas about the unseen workings of art, the politics of perception, and the ways subcultures can shift the social fabric in these perilous times.” —Jeff Jackson, author of Destroy All Monsters

"Just as The Big Sleep is guided by the imagery of the Grail myth, Seb Doubinsky’s smoky, Chandleresque mystery follows a profane tarot into murder and heavy drugs, New Babylon’s dark politics, and the Egyptian occult. Doubinsky’s a grand master of terse episodes, tight rooms and close dialogue. His clean style and terrific sense of pacing are in the finest traditions of noir. Georg Ratner is part Bogart, and part something like Mad Men’s Don Draper with punk rock tastes, a hardboiled investigator falling into mysticism, and a Faustian bargain. Add a wicked sense of irony to all this weird beauty, and you have a killer novel." —James Reich, author of the Song My Enemies Sing

"Sebastian Doubinsky’s The Invisible is dystopian fiction at its most “mythical,” to paraphrase Georg Ratner, City Commissioner of New Babylon, who is trying to solve his ex-partner’s murder and discover the source of a new reality-altering drug called Synth. Alternately melancholic and absurdist, The Invisible is both dire and whimsical, paranoid as early Thomas Pynchon, psychedelic as P.K. Dick and as full of wonder as anything by J.G. Ballard." —J.S. Breukelaar, author of Aletheia and Collision: Stories

"Doubinsky’s Dystopian detective novel reveals our greatest weapon against tyranny; at once gripping, beautiful, and meditative. A must read." —Vincenzo Bilof, author of The Violators, Dark Rising and The Profane

"Seb Doubinsky’s The Invisible is proof positive that often less is more – its chapters neat, sharp tiles in a complex mosaic. It reminded of Simenon and Lem for noir and the politics of a dystopian hierarchy, and reminded of Doubinsky in its brushes with Egyptian mythologies and a weird untethered experience for the reader. Even if this is your first foray into the City-States Cycle, it’s as good an entry point as any. Fascinating structure, cool clear prose." —Jeffrey Ford, award-winning author of A Natural History of Hell and Out of Body

"A poetic, smoke-wrapped puzzle box of a book that folds in on itself with each crisp turn of the page. Doubinsky writes like a chess master shifting his pieces confidently around the board, always one step ahead of the reader. Excuse me while I read it again." —Kyle Richardson, author of Beast Heart and Wild Horse

"To confine The Invisible to a single genre belies its complexity. Part satire, part geopolitical commentary, part science fiction—and yes, absolutely, part noir—Doubinsky’s latest is another mindbending excursion into the fractured reality of his City States; a world enough like our own to offer a terrifying clarity of vision, so different as to make us question the foundations of our reality." —Kurt Baumeister, author of Pax Americana

"The Invisible is an all-consuming, hard-boiled mystery: terrifically told, unexpectedly poetic, and refreshingly non-apologetic." —Viken Berberian, author of The Cyclist and The Structure Is Rotten, Comrade

"Questions, hints, and echoes float, fade and reappear as reality shifts little by little until nothing is what it seems. In a fog-bound city, a hapless bureaucrat investigates a murder, following a path like a Mobius strip between shifty political factions, heading for a fate for us all that may have already occurred. It's a lyrical, noir, ontological depth-charge that brings a primal fear with the truth, and a line from Yeats: "...what rough beast, it's hour come round at a last, slouches toward Bethlehem to be born?" This one will haunt you." —Roy Freirich, author of Deprivation and Winged Creatures

"What do a tweeting politician and the occult have in common? Seb Doubinsky’s The Invisible staggers the world with a new offering that’s part of Doubinsky’s dystopian universe of the City-States series. The Invisible cascades at a spectacular pace with witty illustrated epigraphs on fools, magicians, priestesses, hierophants and more. The political thriller with its short, sharp style of bite-size chapters whirls you into a metropolis that feeds on its ghosts." —Eugen Bacon, author of Claiming T-Mo

"In text that flares, sizzles, hisses and crackles, things are not what they seem in a fiction that exists in a moment … Doubinsky’s The Invisible is a titillating speculative thriller that is everything you expect and more." —Aurealis Magazine