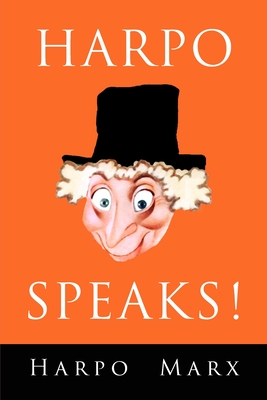 By Harpo Marx, Rowland Barber
Email or call for price.

Facsimile of 1961 Edition. "Adolph Marx Harpo] squashed his formal education at the age of eight when he was dumped out of the 2nd grade window at P.S. 86 for the last time by two Irish classmates. He never went back. But his informal education blossomed on the streets of New York's Upper East Side; as a piano player in the Happy Times Tavern, on the vaudeville circuit of the early 1900's, at all-night poker games in the Algonquin Hotel. This is a racy autobiography by the mute Marx Brother with the rolling eyes, oversized pants and red wig who could send a glissando reeling over his harp. From the financial embarrassment of his childhood generally due to his predatory gambler-brother, Chico, he rose to the free-swinging, free-spending, game-loving gang of the twenties headed articulately by Alec Woollcott. There was croquet at the Woollcott's Vermont retreat, poker at the Algonquin, roulette on the Rivera, and backgammon at the Garden of Allah in Hollywood. At 41 he finally married and dutifully tells the reader in scenario style the conversation and events of his first dates with his wife. It is a chatty, colorful story designed for shockeroos and honks and only gets dull when there are no more pranks to play on anybody. The most appealing parts of Harpo's tale deal with his tour of Russia and his description of his family, particularly his mother Minnie with her Master Plan and Father Frenchie peddling the ""lappas"" (tailor's remnants). It is enjoyable reading and polished writing." Kirkus, 1961