Antarctica and the Secret Space Program: From WWII to the Current Space Race (Paperback) 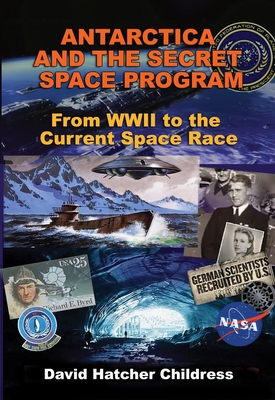 David Childress, popular author and star of the History Channel show Ancient Aliens, brings us the incredible tale of Nazi submarines and secret weapons in Antarctica and elsewhere. He looks into the strange life and death of Rudolf Hess, as well as the mystery of James Forrestal and the secret group called MJ-12. He examines Operation Highjump led by Admiral Richard Byrd in 1947 and the battle that he apparently had in Antarctica with flying saucers. Through "Operation Paperclip," the Nazis infiltrated aerospace companies, banking, media, and the US government, including NASA and the CIA after WWII. He reveals that the Nazis had built secret bases in a variety of places during WWII, including Greenland, the Canary Islands, Tibet and Antarctica. Childress discusses the secret U-boat fleet that patrolled the Atlantic and Antarctic Oceans for decades after the war. He examines the secret German space program and its flying disks and tubular aircraft; the secret technology involved, including anti-gravity propulsion technology; underground and under ice bases; strange things happening in South America; and secret bases on the Moon and Mars. Childress looks at the possible merger of Nazi assets in Antarctica with the Americans' and the use of Antarctica as a space base for traffic to secret space stations in orbit and below the surface of the Moon. The author reviews military space programs such as Solar Warden, Lunex and Project Horizon. Does the US Space Force have a secret space program that maintains huge ships in orbit around the Earth and employs hundreds of astronauts as crew for these vehicles? Includes a 16-page color section.