Haunebu: The Secret Files: The Greatest UFO Secret of All Time (Paperback) 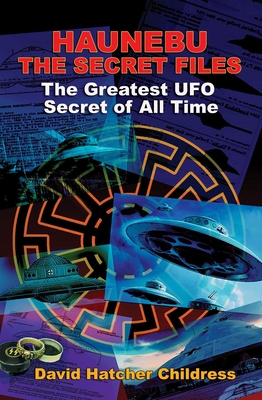 David Childress, popular author and star of the History Channel show Ancient Aliens, brings us the incredible tale of the German flying disk known as the Haunebu. Although rumors of German flying disks have been around since the late years of WWII it was not until 1989 when a German researcher named Ralf Ettl living in London received an anonymous packet of photographs and documents concerning the planning and development of at least three types of unusual craft--craft which we would classify today as UFOs or flying saucers. Ettl went on to make several television documentaries based on the material in the packet and released most of the documents and photos to researchers in Austria and other parts of Europe. What the Ralf Ettl document dump shows us is what many have suspected for a long time: that WWII did not end in the manner in which we have been told, and a remnant of the Nazi military--particularly the SS--continued to operate flying saucers and submarines around the world in the decades after the end of the war. This activity--involving a flying saucer known as the Haunebu--was particularly notable in South America, but it ultimately involved all the continents of the world including Antarctica. Join Childress as he shows us the secret files involving the Haunebu, the Vril craft, the Andromeda craft, and others. Includes a 16-page color section.