Gods and Spacemen Throughout History: Did Ancient Aliens Visit Earth in the Past? (Paperback) 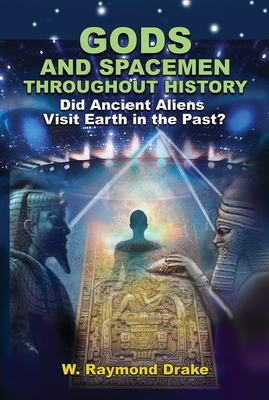 From prehistory, flying saucers have been seen in our skies. Where have they come from? Why are they here? As mankind sends probes beyond the fringes of our galaxy, we must ask ourselves: Has all this happened before? Could extraterrestrials have landed on Earth centuries ago? Our ancestors believed they were inspired by the gods-all-powerful visitors from the stars. How much influence did these space gods have on man's evolution? Can we hope for some guidance during our current troubled times? In this deluxe edition reprint, W. Raymond Drake, one of the developers of the Ancient Astronaut theory, examines the role of extraterrestrials in mankind's development, and assures us that in times to come, we will again be visited by gods and spacemen from other worlds. Drake spent many years digging through huge archives of material, looking for supposed anomalies that could support his scenarios of space aliens impacting human history. Chapters include: Spacemen; The Golden Age; Sons of the Gods; Lemuria; Atlantis; Ancient America; Aztecs and Incas; India; Tibet; China; Japan; Egypt; The Great Pyramid; Babylon; Israel; Greece; Italy; Ancient Rome; Scandinavia; Britain; Saxon Times; Norman Times; The Middle Ages; The Age of Reason; Today; Tomorrow; more. As Drake himself said, I aspired to collect as many facts as possible from ancient literature to chronicle for the past what Charles Fort has so brilliantly done for the present century. Includes a 16-page photo section. First published in 1975.